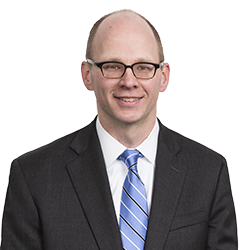 Christopher B. Kaczmarek represents employers of all sizes in matters involving a wide range of state and federal laws before state and federal administrative agencies and courts, including the New Hampshire Commission for Human Rights, the New Hampshire Department of Labor, and the Massachusetts Commission Against Discrimination.  Chris regularly defends employers in litigation, including class actions, involving claims of:

He also defends and prosecutes cases involving claims of misappropriation of trade secrets and violations of non-competition and non-solicitation agreements. He has specific knowledge of the Fair Labor Standards Act, as well as state wage and hour laws.  Additionally, Chris counsels employers on the steps necessary to minimize the chance of litigation. He provides advice to employers regarding:

Chris has written for a variety of publications and regularly gives lectures, presentations, and training sessions regarding a variety of employment law topics, including the identification and prevention of discrimination and harassment in the workplace. He is a frequent editor of the firm's wage and hour-related publications. His clients include financial services companies, retailers, hospitals and health care providers.

Before joining Littler, Chris practiced labor and employment law at another firm. He also previously clerked for the Hon. Paul J. Barbadoro, U. S. District Court for the District of New Hampshire.

Massachusetts Designates Juneteenth as a State Holiday, Creating a New Obligation for Many Retail Employers

Under WARN, and Beyond? Massachusetts High Court Holds That Failure To Pay A “Back Pay” Award Does Not Give Rise To Wage Act Liability

Non-Competes to Stay in Massachusetts…For Now

Massachusetts Earned Sick Time Safe Harbor is Drawing to an End: Are Your Policies Compliant?

Obama Sick Leave Order Ups the Odds of Coverage for All

New Year, New Problems - How To Deal with Recent Changes in Employment Law

Paid Family and Medical Leave, Marijuana, and Other Hot Topics For Massachusetts Employers

Massachusetts Pay Equity: What You Need to Know

When to Settle, Waivers That Work, and Other Thorny Issues When Settling, Including the Medicare Secondary Payer Act

The Next Wave: Wage & Hour Class Actions in Massachusetts