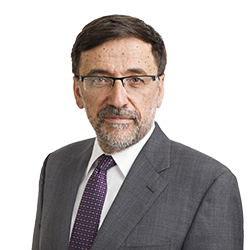 George Vassos focuses his practice on advocacy before trial and appellate Courts, and before various labour boards, arbitrators, mediators, adjudicators, and other administrative tribunals, as well as strategic and proactive advice on a wide variety of labour and employment law issues. His work includes:

Canadian Association of Counsel to Employers

Conference of Independent Schools of Ontario

Named, The Best Lawyers in Canada©

Alberta, Canada Court of Appeal Decides CERB Payments Should Not Be Deducted from Damages for Wrongful Dismissal

25 Key Developments in Canadian Labour and Employment Law in 2022

Union member's tort claim must be decided by court – not arbitrator

Ontario, Canada: OCA Decides Union Member’s Tort Claim Against Third Party Must be Decided by Court Rather than Arbitrator

Are employees entitled to paid time off to vote in the election?

Ontario, Canada: Appeal Court Declines to Resolve Whether Employees Laid Off During Pandemic May Claim Constructive Dismissal at Common Law

Ontario, Canada: Some Employees May Be Entitled to Paid Time Off to Vote in June 2nd Provincial Election

Can CERB payment be deducted from wrongful dismissal damage award?

Do mandatory vaccination policies infringe on Charter of Rights and Freedoms?

Working for Workers Act, 2022, introduced and carried at first reading

Ontario, Canada Removing Masking Requirement on March 21 in Most Settings and Ending All COVID-19 Public Health Measures on April 27

Alberta, Canada: Arbitrator Decides COVID-19 Pandemic is Cataclysmic Event that Did Not Trigger Entitlement to Severance Under Layoff Provisions

Ontario, Canada Court Confirms Working for Workers Act, 2021 Does Not Void Non-compete Agreements Entered into Prior to October 25, 2021

Ontario, Canada Moves Back to Amended Step Three of its Roadmap to Reopen

Employers in British Columbia, Canada are Required to Reactivate their COVID-19 Safety Plans

Canada: Bill C-3 Will Provide Paid Medical Leave and Other Leaves for Federal Employees and Prohibit Intimidation in Health Care

Ontario, Canada Temporarily Reverts to Step Two of Roadmap to Reopen with Modifications

24 Key Developments in Canadian Labour and Employment Law in 2021

What does the new Working for Workers Act mean for workers and employers?

Ontario, Canada Passes Law Entitling Workers to Wear a Poppy in the Workplace During Remembrance Week

Canada: Updated Guidance on How Employers Should Fill Out Records of Employment During COVID-19 Pandemic

Ontario issues guidance on proof of vaccination status for organizations

Ontario, Canada Issues Guidance on Proof of Vaccination Status for Patrons of Restaurants and Other Select Businesses and Organizations

Proof of Vaccination Will Soon Be Required to Gain Access to Certain Public Settings in Ontario, Canada

Laid Off Over COVID? You Can’t Claim Constructive Dismissal

Human Rights Tribunal of Ontario, Canada Provides Employers with Roadmap for Responding to Requests for Exemptions from Mask-Wearing Policies

Ontario, Canada Superior Court Determines Employee Misconduct Did Not Justify Dismissal for Cause Without Notice

It is Now Easier for Organizations in Ontario, Canada to Offer Private Rapid COVID-19 Testing of Asymptomatic Employees

Should Employers in Ontario, Canada Provide Employees with Paid Time Off to Get a COVID-19 Vaccine?

Termination provision done in by ‘what if?’

Ontario, Canada: New and Updated Guidance for Businesses Required to Have a Written COVID-19 Safety Plan

Ontario, Canada: Masks Must be Worn in Indoor Area of Business Premises and in Vehicles Operating as Part of Business

Employers must screen workers and essential visitors for COVID-19

Employment agreements: The whole is greater than the parts

COVID-19 and its reliefs – from mass termination rules, and through government programs

Ontario, Canada Court of Appeal Confirms Past Experience with Vendor in Asset Purchase Transaction a Factor in Calculating Reasonable Notice

Bill 195 and the End of COVID-19 Declared Emergency Leave in Ontario, Canada: What it Means for Temporary Layoffs and Deemed Leave

Ontario, Canada: In Significant Decision, Court of Appeal Analyzes Employment Agreement as a Whole When Evaluating Enforceability of Termination Provisions

Canada: Eligible High-Revenue Employers in Need of Significant Funds to Weather the COVID-19 Storm Can Soon Apply for Emergency Financing

Canada: COVID-19 and Provincial Announcements of Plans to Gradually Ease Restrictions and Reopen

Ontario, Canada: Calculation of Reasonable Notice Period When a Contractor Becomes an Employee

Ontario, Canada: Entitlement to Benefits for Stress under the WSIA May Bar Constructive Dismissal Claims for Bullying and Harassment

Supreme Court of Canada to Decide Extent of Employers’ Duty of Trust, Honesty and Good Faith in Performance of Incentive Plans and Employment Contracts

Occasional flexibility does not alter terms, conditions of employment contracts

Ontario, Canada: Occasional Flexibility Does Not Alter Terms and Conditions of Employment Contracts

What are Employee Entitlements and Employer Obligations During the Upcoming Canadian Federal Election?

Overview of minimum wage, hours of work laws across Canada

Overview of laws that impact employment, labour in Canada

Ontario, Canada: Professional Service Employer’s Use of Different Corporate Structures in Employment Agreements Does Not Negate Uninterrupted Service in the Calculation of Reasonable Notice

Nova Scotia, Canada: Is Sex Addiction a Disability that Must be Accommodated?

Ontario, Canada: Reducing the Risk That an Employer’s Release of Claims is Found Unenforceable

Ontario, Canada: Sexually Harassed Employee Wins the Battle but Loses the War When she is Awarded Damages But is Ordered to Pay More to Her Employer for Costs

Bill 148 is Now the Law in Ontario, Canada

Ontario, Canada: Employer Sentenced to 30 Days in Prison for Nonpayment of Wages

Littler Lawyers Recognized in The Best Lawyers in Canada 2017

Just Case or No Just Cause?

A Focus on Fidler v. Sunlife

The Coronavirus: What Should Employers Be Doing Now

The Ever Evolving Landscape of Employment Law in Canada

The Williamson Group, Toronto, ON

Assessing Risk with Respect to Removing or Changing Benefits