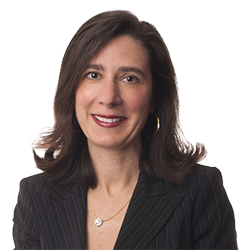 Elizabeth A. Lalik represents employers with respect to high profile or high risk matters spanning all aspects of employment law, whether executive compensation or discrimination claims, unfair competition, equal pay issues, or retaliation and whistleblowing claims (including EEO and False Claims Act retaliation). Beth successfully minimizes risks for her clients and resolves matters through both pre-litigation strategy (including complex and/or sensitive internal investigations) and litigation. Her practice resides in the Virginia/D.C./Maryland region but she has prevailed in courts up and down the Eastern seaboard.

Beth speaks regularly before client and other audiences regarding a myriad of employment law issues, from recent state efforts in the paid leave and background check arenas, to government contracting issues, to FMLA and ADA concerns, to retaliation and whistleblowing issues, to complex internal investigations.

Before joining Littler, Beth was a partner at an AmLaw 100 national law firm.

District of Columbia Implementing Revisions to Broad Ban on Non-Competes

Impact of the Ukraine Conflict and Related Sanctions on Global Workforces

The Ukraine Conflict & Related Sanctions: What Is the Impact on Global Workforces?

Some States Push Back on Governmental and Private Employer Vaccine Mandates

Can Employers Refuse to Hire Applicants Based on Alt-right Views or Affiliation?

Lawyers Say HR Must Be Aware of ADA, FMLA When Considering Leave Requests

Conducting Effective Workplace Investigations in Both the Live and Virtual Worlds

U.S. Vaccine Mandates vs. State Anti-Vaccination Laws and a Survey of the Dramatic Changes in Virginia Employment Protections

Tysons Corner Fall Mini Series: The Continuing Repercussions of COVID-19 and Working in the "New Normal"

What Lurks Beneath: Conducting Effective Investigations of Workplace Issues

The Interplay of the FMLA, ADA and Workers’ Compensation Laws

Navigating the Maze of Employee Leaves of Absence: Practical Guidelines for ADA and FMLA Compliance in Light of Recent Legal Developments

Managing Legal Risk in the Use of Hiring Screening Tools

Hiring, Disciplining, and Firing: A Soup-To-Nuts Review of What You Can and Can’t Do Overseas, International Employment Law 2012

Managing Employees in the European Union: Challenges Across E.U. Borders