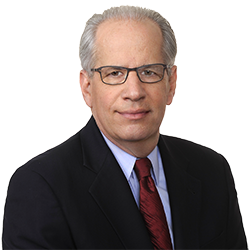 With over 30 years of legal experience, Mark J. Grushkin focuses on providing clients with employee benefit services involving mergers and acquisitions, retirement plans, health and welfare plans, and litigation. He has been involved in a wide variety of employee benefits matters, including:

Mark offers an employee benefits screening review for his clients, in which he replicates the company’s IRS and DOL audits. Through this analysis, he often discovers significant plan issues which may be advantageously corrected thus avoiding serious tax consequences in the event IRS or DOL audits.

Mark has authored and co-authored articles on:

He also has been a speaker and panelist addressing numerous groups on employee benefits, including the Practicing Law Institute, State Bar of California, California CPA Society, American Society of Pension Actuaries, and the University of Southern California Tax Institute.

DOL Issues Guidance on Use of Cryptocurrency in 401(k) Plans

Benefits Litigation To Watch For Post-Pandemic

Association Health Plans: How Do You Solve a Problem Like a MEWA?

How the Secure Act Will Impact Your Retirement Plans

Retirement Plans Under Attack by Plan Participants and Government Agencies: An Action Plan for Employers

Fiduciary Responsibility—What Does It All Mean to You? Retirement, Health and Welfare Plans Under Attack

Health Care Reform – What Does it Mean to You?

Health Care Reform – What Does it Mean to You?

Retirement Plan Trends and the Widening Gulf of Fiduciary Responsibility

Retirement Plan Trends and the Widening Gulf of Fiduciary Responsibility