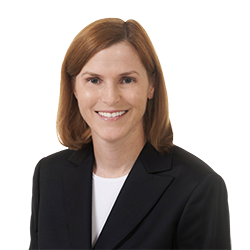 Denise M. Visconti handles a broad variety of employment litigation matters, most often stemming from claims arising under the California Labor Code and the Fair Labor Standards Act, alleging overtime misclassification and other wage and hour violations. She also has experience with single-plaintiff claims involving:

A large portion of her practice involves the defense of clients in class action litigation, particularly in wage and hour matters, along with representative actions and private attorney general matters.

Denise also has extensive experience conducting pay equity audits for all types of employers, from start-ups to Fortune 50 companies, and helped develop the Littler Pay Equity Assessment™, including counseling employers on a broad range of state and federal issues related to pay equity, from compliance, to updating policies and job descriptions, to training managers and recruiters, and more.

She appears in state and federal courts and has handled arbitrations in various forums, including the Financial Industry Regulatory Authority, the American Arbitration Association, and JAMS.  She is particularly familiar with the Employment Non-Discrimination Act and federal, state and local laws and regulations pertaining to gender identity and expression.

Denise regularly provides advice and counseling to clients regarding gender identity and gender expression-related issues, gender transitions in the workplace, and various issues relating to domestic partnerships and same-sex couples. She also has given a number of presentations to human resource professionals, managers, and employees on valuing diversity and creating and maintaining a diverse workplace.

Denise works with a diverse group of clients, including:

Co-President, Board of Directors

EEOC Explains How to Report Nonbinary Individuals on EEO-1 Form

Fair Pay Audits Can Help in the Event of Litigation

How to Comply with New State and Local Laws

What Employers Need to Know About Pay Gap Laws

'They' Are on the Way: What Employers Should Know About Non-Binary Gender Markers

Masterpiece Cakeshop: Workplaces Will be Healthier if Employers Fully Understand the Decision, the Law and the Complexities of the Issues

Three Tips For Businesses Looking To Root Out Pay Gaps

Companies Are Warned About Compliance 'Minefields' for Pay Equity

Dear Littler: How Should I Handle Customer Concerns about a Transgender Employee?

How to Address Transgender Employment Issues in the Workplace

Accommodating Attorneys in the Process of Transitioning Their Gender

From Pronouns to Restrooms – Accommodating Transgender Employees in the Workplace

EEOC: Bias based on sexual orientation is illegal

What Do Employers Need to Know About Providing Restroom Access To Transgender Employees?

Marriage with a Capital "M": What Employers Need to Know About the Supreme Court's Decision in Obergefell v. Hodges

ENDA's Chances of Passage Better Than Ever, Lawyers Say

Gender Identity And Expression: The Next Frontier

Is Your Plan Affected by the Proposed Changes to Section 1557's Nondiscrimination Rules?

Pay Equity as a Legal and Business Imperative | Compensation Auditing

The Pay Equity Wave Rolls On: What You Need to Know to Stay Afloat

Pay Equity as a Legal and Business Imperative

LGBT Issues in the Workplace: What to Expect from the Trump Administration

Obergefell: What Does Same-Sex Marriage Mean for Employers?

Out & About: LGBT Issues and the Globally Mobile Workforce

Diversity in the Workforce: Thinking Beyond Locally and Acting Globally

Transgender Issues in the Workplace

It Gets Better: Breaking Down Barriers To Advancement for LGBT Professionals

Transgender 101: Keys To An Open and Inclusive Workplace

Best Practices for Building a GLBT Inclusive Workplace: Perspectives from Outside and In-House Counsel

Gender Identity and Expression: Legal Implications In the Workplace in 2010 and Beyond

New Sexual Orientation & Gender Identity Protections in 2010? Managing the Impact on Your Workplace