Dear Littler: Do I Have to Allow Guns in the Workplace?

By Andrew Rogers on

Dear Littler: I’m a vice president of a retail company operating in five states. While visiting one of our stores, I overheard some employees talking about their handguns. One mentioned keeping her firearm in her car, while another said he has a concealed carry permit. I don’t like the idea of firearms in the workplace at all – brought in by employees or customers. Can we create a blanket policy prohibiting all weapons anywhere on company property, including the parking lots?

The thought that someone at your workplace may be armed can be startling, but you should be careful to avoid implementing policies that violate state laws protecting the rights of gun owners. In recent years, many states have enacted laws that allow employees to take firearms into places where they previously might not have been allowed. The most prevalent variant is known colloquially as a “parking lot” law. Although the details of these laws vary from state to state, as their name suggests, they generally prevent employers from prohibiting employees from storing firearms in their cars when parked on the employer’s premises where they are otherwise permitted to be. Your question raises several issues, so let’s take a closer look at some statutes and other developments that might guide your analysis into adopting a corporate firearms policy.

While keeping firearms out of the workplace is an understandable goal, banning them entirely from company parking lots is unlawful in many states. To date, 26 states have passed laws that, in some way, protect employees' rights to store a firearm in their personal cars in an employer’s parking lot.1 Tennessee’s parking lot law prevents employers from prohibiting any individual with a handgun carry permit recognized by Tennessee to store a firearm and ammunition in his or her car parked on the employer’s property, subject to certain conditions.2 The vehicle in question must be parked in a location where it is allowed to be.  While the permit holder is in the vehicle, he or she must ensure any firearm or ammunition is “kept from ordinary observation.”  When the permit holder is not in the vehicle, the firearm or ammunition must be secured in the locked vehicle—in the trunk, glove box, or any other container affixed to the vehicle.3 As long as employees satisfy these requirements, your employer cannot lawfully prevent them from storing a handgun in their cars.4

Other states have imposed conditions similar to those required by Tennessee, but a few are less restrictive. For example, many states’ parking lot laws do not require that the employee have a license or permit to carry the gun they are storing in their vehicle.5 As you have operations in several states, you should research and review the parking lot laws that may apply to your other locations.

While the parking lot laws generally protect an employee’s right to store a gun in his or her personal vehicle, almost all of the states with parking lot laws explicitly allow an employer to prohibit firearms in a company-provided vehicle.6 No state specifically allows employees to store firearms in company vehicles.  In addition, there are a myriad of other exceptions unique to different states. In Georgia and Arizona, for example, any parking lot owned by a United States Department of Defense contractor is exempt from the parking lot law.7

States imposed additional restrictions as well.  Georgia also exempts certain entities from the state parking lot law, including jails, electric utilities, and any employer with a parking lot next to facilities providing natural gas, liquid petroleum, water storage, and vital law enforcement services. Utah and Florida maintain a similar exemption for school premises, religious organizations, government entities, and single-family detached residential units.8 Similarly, in Utah, Arizona, and Louisiana, if employees are provided an alternative parking lot at no additional charge for vehicles with weapons, or a secure storage location where employees can store their firearms prior to taking the vehicle into the secured parking area, then an employer may be able to prohibit the storage of firearms in one of their parking lots.9

Not all states have enacted parking lot laws.  Indeed, nearly half have not enacted statutes that address this issue.  If you operate out of Connecticut, New Mexico, North Carolina, or Virginia, for example, your employer may be authorized to restrict firearms in the company parking lot.  In other states, such as Colorado, the law is less clear.  While employees are not entitled by statute to secure firearms in their vehicles in these states, and employers and property owners retain broad authority to prohibit the practice, in the absence of a policy clarifying the employer’s (or property owner’s) position on the possession of firearms and ammunition, employees may be allowed to carry firearms consistent with federal and state law.  As a result, if your employer wishes to impose any restrictions, it would be important to develop a policy addressing the possession of weapons, including firearms, on its premises.

Possession of Firearms in the Workplace

You noted that some employees not only wanted to store their firearms in their car, but would like carry a firearm in the workplace.  State legislatures have overwhelmingly determined that employers should be allowed to restrict firearms in the workplace, consistent with the traditional property rights.  While property owners are generally presumed to be able to exclude individuals from their property,10 24 states have laws that explicitly allow employers to prohibit firearms on their premises. In Tennessee, an individual, corporation, or business entity is allowed to prohibit the possession of weapons by employees at a workplace owned by the organization.11 To take advantage of this law, employers must post notice of the ban to all affected employees.12 Some states, such as Nebraska and Minnesota, require that the employer personally request that someone carrying a gun on their property remove his or her firearm from the premises.13

Many states require that employers post proper signage if they prohibit firearms on private property.14 In Tennessee, the property owner must display a notice stating “NO FIREARMS ALLOWED,” along with a specific pictorial representation of the phrase, both of which must be a specific size.15 The sign must be posted in prominent locations, including all entrances primarily used by people entering the property, and must be plainly visible to the average person.16 Some states are not as strict as Tennessee in their signage requirements. For example, Missouri requires only that the sign be no smaller than eleven inches by fourteen inches, and the writing not be less than one inch.17 Even less strict are North Carolina and New Mexico where, while signage is a method of prohibiting firearms on private property, there are no requirements relating to the contents of the signs.18

Employers should also be aware that certain states treat firearms ownership as a pseudo-protected class. In Indiana, an employer cannot require an applicant to disclose whether he or she owns a firearm, and cannot condition employment on limiting the employee’s rights, including the right to store a gun in a locked vehicle.19 In Georgia and Florida, employers cannot condition employment on an employee’s agreement to forego bringing firearms into the employer’s parking lot.20 Similarly, North Dakota prevents employers from discriminating against an employee for bringing a firearm onto the premises if the firearm is never displayed on the premises for a purpose other than defense.21 (Tennessee does not appear to offer specific employment protections for firearms owners.)

Notwithstanding the legal limits on firearm policies, employers are often concerned about the risk that guns present.  Fewer than half of the states with parking lot laws have provisions protecting employers from liability for injuries related to having firearms in the employer’s parking lot.22 For instance, Tennessee provides that employers are not liable for any harm or injury that occurs because someone stored a handgun in a locked car.23 Thus, in Tennessee, an employer would have a defense against liability if a stranger trespassed into an employer’s parking lot, stole a gun stored in an employee’s car, and injured someone with that weapon.

A handful of states address a related question:  if an employer chooses not to restrict firearms when it could lawfully have done so, should it be liable for injuries resulting from a firearm in its workplace?  Tennessee is among the states that have a law answering this question.  State law exempts employers from liability for any damage related to gun use on their premises, even if they did not create a policy prohibiting weapons on their property.24 For example, if an employer allowed its employees to conceal and carry in the workplace and one of the employees injured someone with his or her weapon, the employer presumably would not be held liable for not prohibiting the firearm on its premises.  Similarly, Kansas and Ohio have laws protecting private employers from liability if they do not prohibit firearms on their property.25 Although Kansas protects the employer from all liability, Ohio and Tennessee only protect against civil liability.26

I hope this information, while perhaps overwhelming, helps your employer determine how to address firearms in the workplace. At least in your Tennessee branch, you may need to allow employees to secure their firearms in their car, although the company can keep employees from bringing firearms into the office itself and in its vehicles. As shown by these various state laws, what you can limit in the other locations will depend on where your employer operates. Best of luck, Nervous.

4 Of course, these requirements do not override other federal and state laws.  For example, they do not allow a permit holder to possess an unlawful firearm or carry a firearm in locations prohibited by federal law. 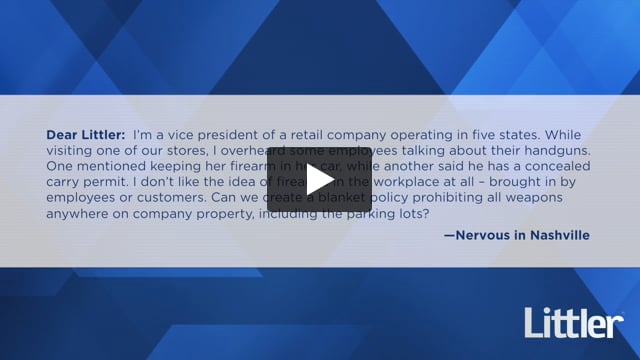