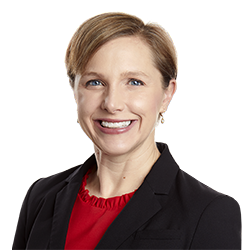 Jennifer C. Znosko is an experienced employment attorney whose practice extends to numerous areas of litigation and employment counseling. As a seasoned attorney and former human resources professional, Jen brings a unique and valuable perspective to any employment or personnel challenge faced by her clients.

Notably, Jen obtained dismissal of straight time claims under the FLSA asserted by plaintiffs in two different collective/class action lawsuits pending in the District Court for the Eastern District of Missouri. In one of these cases, the judge also granted a motion for decertification of a conditionally-certified collective under the FLSA.

In addition to her wage and hour practice, Jen regularly litigates discrimination and retaliation claims under Title VII of the Civil Rights Act of 1964, the Missouri Human Rights Act and the Illinois Human Rights Act in federal courts and state courts in Missouri and Illinois. She has handled all stages of the litigation process including:

Jen has conducted fact investigations, prepared position statements, represented witnesses during agency interviews, and represented employers during fact-finding conferences and mediations before administrative agencies such as the Equal Employment Opportunity Commission, the Missouri Commission on Human Rights and the Illinois Department of Human Rights.

As a former human resources professional, Jen partners with her clients and provides practical solutions to workforce management challenges encountered by employers. She is certified as a Professional in Human Resources® (PHR) by the Human Resources Certification Institute.

Jen has experience working with clients in numerous national and global industries, including:

After law school, Jen served as a law clerk for the Hon. Mary R. Russell of the Supreme Court of Missouri. While at the University of Missouri School of Law, she was the managing editor of the Missouri Law Review, and a member of the regional mock trial and regional moot court teams.

Vice President, Board of Directors

State and Local COVID-19 Orders Affecting the St. Louis Region – What Does This Mean for Employers?

Weed at Work: Are Marijuana Users the Newest Protected Class?

Weed at Work: Are Marijuana Users the Next Newest Protected Class?

What Every Attorney Should Know: Labor, Employment & Tax under the New State & Federal Administrations – The Current Status of Federal Wage & Hour Law

Effective Wage and Hour Audits: An Ounce of Prevention Is Worth a Pound of Cure

Preparing for the New Overtime Rule: Final Considerations About Policies, Procedures and Training

Preparing for the New Overtime Rule: Communication About Reclassification Decisions

Preparing for the New Overtime Rule: Considerations & Challenges in the Reclassification Process