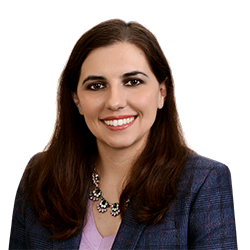 Jannine E. Kranz represents and counsels employers in all matters of labor and employment law.

Prior to joining Littler, Jannine worked at a large full service law firm where she practiced labor and employment law. She represented employers in a broad range of employment litigation matters, including defending against discrimination, harassment, wrongful termination, breach of contract, defamation, whistleblower retaliation and wage and hour claims. Jannine also defended PAGA claims and wage and hour class action cases. During her tenure, she drafted a successful motion for summary judgment on a whistleblower retaliation case and drafted and argued a successful motion for summary adjudication in a disability discrimination case which resulted in the dismissal of all of plaintiff’s employment claims. Jannine also provided advice and counsel to clients on various personnel issues, including payroll, termination, medical leave and employee handbooks.

Jannine previously worked at a medical malpractice defense firm, where she served as the second chair attorney in two trials, gaining valuable experience as she prepared and argued the motions in limine and other pretrial motions in addition to preparing all of the exhibits and trial documents. Both cases resulted in defense verdicts.

During law school, Jannine served as an articles editor for the Hastings Law Journal and served as an extern to the Hon. Claudia Wilken, U.S. District Court, Northern District of California. While at the University of Chicago, Jannine completed a general course study abroad program at the London School of Economics and Political Science.

Litigation in a Virtual World: Where We've Been and Where We Are Going