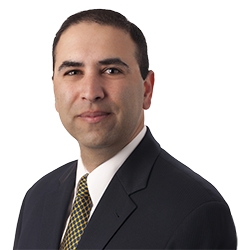 Greg Iskander is a trial attorney with extensive experience in state and federal courts, and has served as first or second chair in more than 35 jury and court trials and arbitrations. He practices in a broad range of employment matters, including:

He also advises employers in the areas of privacy, internal and government investigations, and regulatory matters. Greg is also a frequent presenter and trainer for management on anti-harassment, discrimination and workplace investigations.

Greg has extensive prior experience as a white-collar criminal defense attorney, specializing in computer-related crimes. He served as a clerk for the Honorable Don R. Work of the California Court of Appeals, Fourth District, Division One, and is a former lieutenant with the United States Navy's Judge Advocate General's Corps.

The New Law of Pretexting

Pretexting: The Legal Basics, Then and Now

The 2014 Employment Law Update: The Year in Review and What to Expect in 2015

Medical Marijuana in the Workplace: A Growing Trend

What Might the State Bar Think About BYOD, ESI, The Cloud, Clawbacks, and Other Hot Technology Topics