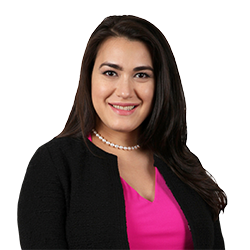 Whether advocating for clients during litigation or providing counsel on high-stakes workplace issues, Emilie Hammerstein demonstrates creativity and resolve as a legal problem solver.

She represents domestic and global employers of all sizes before administrative agencies and in federal and state courts and arbitration. In addition, she has advised on a variety of employment concerns, with particular emphasis on leaves of absence and disability accommodations, as well as reductions in force.

Some of Emilie’s representative achievements on behalf of her clients include the following:

Before joining Littler, Emilie was an associate in the labor and employment practice of a large regional, multipractice law firm. During law school, she was a topics editor on the University of Pittsburgh Law Review. Prior to attending law school, she taught English in Shanghai, China, and worked in broadcast marketing at CBS News in New York.

What are you? A Conversation with Littler’s “Other” Attorneys

Littler Lightbulb: A Dose of Paid Time Off for COVID-19 Vaccinations

What To Know About DOL's Revamped Virus Paid Leave Rule

The Next Normal: A Littler Insight on Returning to Work – Handling Concerns about Hesitant or “High-Risk” Employees