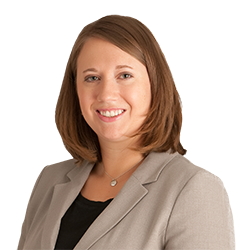 Kristy L. Peters represents and counsels employers regarding all types of labor and employment matters arising under federal and state laws, including:

Kristy litigates matters in both federal and state court, including wrongful termination claims, discrimination and harassment claims, and trade secrets and unfair competition claims. She regularly appears in front of the EEOC in the investigation, mediation, and conciliation process. Kristy also drafts employment agreements and restrictive covenants, drafts employer policies and handbooks, conducts employee training and advises on workplace issues.

Some of Kristy's notable decisions include the following:

In law school, Kristy was articles editor for the Minnesota Journal of Law, Science & Technology and in college she was a sports writer for The Daily Cardinal.

Arizona Center for the Blind and Visually Impaired

Littler's Kristy L. Peters Has Been Named Among the 50 Most Influential Women in Arizona by AzBusiness Magazine

Ask the Legal Expert: Can I immediately fire a manager based on sexual harassment allegations?

Ask the Legal Expert: My employee’s intermittent Family and Medical Leave Act (FMLA) absences only occur on Mondays and Fridays so I suspect FMLA abuse. What can I do?

Ask the Legal Expert: How does the Defend Trade Secrets Act of 2016 (DTSA) protect my company’s trade secrets and what should I do to take advantage of the protections?

Modified Excel Spreadsheet Is Not a Trade Secret Under Arizona Law

What Do You Mean It Isn’t Privileged

Implicit Bias in the Workplace

You Can’t Make Me Come To Work: Case Studies Under the ADA, Reasonable Accommodation and Protected Leaves of Absence

Employee Document Essentials – What to Keep, What to Trash and What Could Land Your Business in the Courtroom

Let the Whistle Blow: Understanding and Responding to Retaliation Claims

Three Legal Stumbles to Avoid in Your Small Business

Lock It Up: Protecting Your Trade Secrets and Preventing Unfair Competition