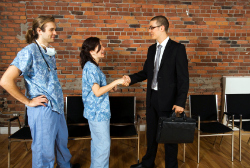 In Christopher v. SmithKline Beecham, the Ninth Circuit issued a strong rebuke to the Department of Labor (and cemented a circuit split) in a remarkable decision upholding the “outside sales” exemption for Pharmaceutical Sales Representatives (PSRs).

The plaintiffs were employed as PSRs for SmithKline Beecham Corporation. The PSRs were classified by their employer as exempt “outside salesmen” under the FLSA and were not paid overtime compensation. The district court granted the employer’s motion for summary judgment, and the PSRs appealed.

The PSRs were supported in their appeal by an amicus filing by the U.S. Department of Labor, in which the Secretary argued that PSRs could not meet the “outside sales” exemption because they do not “make sales.” The DOL argued that as a result of the highly regulated nature of the pharmaceutical industry, PSRs merely promote pharmaceutical products to physicians, but those products are only thereafter purchased by a patient from a pharmacy. Thus, according to the DOL, the PSR does not “in any sense” make the sale of the product. In 2010, the Second Circuit accepted the DOL’s position and held that PSRs could not qualify for the outside sales exemption. In re Novartis Wage & Hour Litig., 611 F.3d 141 (2d Cir. 2010).

The Ninth Circuit was not impressed with this reasoning, concluding that it owed “no deference” to the DOL’s position. The court first expressed frustration that the DOL’s regulations merely paraphrased the statutory language (i.e., a “sale” means a “sale”) without setting forth a particular test for “sale” or instructing employers to look for indicia of sales. Then, the court criticized the DOL’s attempt “to draft a new interpretation of the FLSA’s language” in an amicus brief, noting that giving controlling deference to interpretations expressed for the first time in case-by-case amicus filings would effectively authorize the bypassing of the notice-and-comment rulemaking requirements of the Administrative Procedures Act.

After resoundingly rejecting the DOL’s approach to this issue, the court of appeals took the final step and held that the DOL’s position was plainly erroneous. The court viewed the term “sale” in the FLSA in a “commonsensical” fashion, noting that in light of the “structure and realities of the heavily regulated pharmaceutical industry” PSRs do, in fact, make sales. The court concluded that in this industry, the “sale” is the non-binding commitment from the physician to prescribe the PSR’s assigned product when medically appropriate. Thus, PSRs make “sales” and qualify for the outside sales exemption.

Finally, the court took note of the DOL’s “acquiescence” to the classification of PSRs as exempt for more than seventy years. Quoting Judge Posner, the court reasoned that while it is “possible for an entire industry to be in violation of the [FSLA] for a long time without the Labor Department noticing[, the] more plausible hypothesis is that the ... industry has been left alone” because DOL believed its practices were lawful. The court criticized that the DOL’s “about-face” position, “expressed only in ad hoc amicus filings, is not enough to overcome decades of DOL nonfeasance and the consistent message to employers that a salesman is someone who ‘in some sense’ sells.” The court concluded that the DOL’s argument “fails to account for industry customs and emphasizes formalism over practicality.”

The court’s holding regarding the status of PSRs under the FLSA’s outside sales exemption was significant in its own right. But the court’s strong rebuke of the DOL’s attempt to express its position on a critical wage and hour issue for the first time in an amicus filing may have far greater implications. Employers who have been concerned about the DOL’s recent policy shifts on a variety of issues, announced in amicus filings and “Administrator Interpretations,” now have an unlikely ally in the Ninth Circuit Court of Appeals. In light of the conflicting opinions on the exempt status of PSRs, however, it may only be a matter of time before the Supreme Court agrees to resolve this dispute once and for all.

This entry was written by Robert Pritchard.