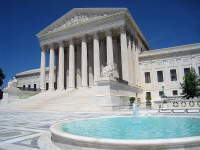 Today the U.S. Supreme Court issued its highly anticipated opinion in Christopher v. SmithKline Beecham Corp., one of the only U.S. Supreme Court cases to address overtime exemptions under the Fair Labor Standards Act (FLSA), and the first to address the criteria for the application of the “outside sales” exemption.  In a 5-4 decision written by Justice Samuel Alito, the Supreme Court held that pharmaceutical sales representatives (PSRs) who were employed by GlaxoSmithKline PLC (Glaxo), formerly known as SmithKline Beecham Corp., were primarily engaged in “sales,” and therefore were properly classified as exempt under the FLSA’s outside sales exemption.

The decision reaches well beyond the pharmaceutical industry,  however, in its refusal to grant deference to the U.S. Department of Labor’s (DOL) changes in position, announced through uninvited amicus curiae briefing – a significant aspect of the opinion with which the majority and all dissenters unanimously agreed. The Supreme Court found that the DOL had acquiesced in the industry’s treatment of PSRs as exempt for over 70 years, and first took the position that PSRs are not exempt under the outside sales exemption in a 2009 amicus brief in the Second Circuit Court of Appeals in In re Novartis Wage and Hour Litigation and later in an amicus brief filed with the Ninth Circuit Court of Appeals in Christopher. In the amicus briefs filed with the Second and Ninth Circuits, the DOL argued that a “sale” for purposes of the outside sales exemption requires a “consummated transaction” directly involving the employee for whom the exemption is sought. The DOL changed its position in 2011, after the Supreme Court granted certiorari in Christopher, and argued that an employee does not make a “sale” unless “he actually transfers title to the property at issue.” The majority opined that deferring to the DOL’s amicus interpretations would amount to an “unfair surprise,” opining “[i]t is one thing to expect regulated parties to conform their conduct to an agency’s interpretations once the agency announces them; it is quite another to require regulated parties to divine the agency’s interpretations in advance or else be held liable when the agency announces it interpretations for the first time in an enforcement proceeding and demands deference.” Writing for the dissent, Justice Stephen Breyer agreed, stating that “[i]n light of important, near contemporaneous differences in the Justice Department’s views as to the meaning of relevant Labor Department regulations . . . I also agree that we should not give the Solicitor General’s current interpretive view any especially favorable weight.”

Having refused to defer to the DOL’s recent shifting positions, the Court then turned to the issue at the heart of the case – whether Glaxo PSRs were properly classified as exempt from the FLSA’s overtime requirements under the “outside sales” exemption. As they did in the Ninth Circuit, the petitioners argued that rather than actually making “sales,” PSRs merely engage in “detailing” – that is, they “provide medical professionals who prescribe pharmaceuticals with the ‘details’ of pharmaceutical products, seeking to educate the prescribers with the ultimate goal of influencing their prescribing decisions.” The petitioners further argued that the applicable regulations expressly define an “outside salesman” as an “employee with the ‘primary duty’ of ‘making sales’” and that the regulations draw a sharp distinction between employees who sell something themselves and those who “promote” products to stimulate sales made by someone else. The PRSs claimed they fit cleanly into the category of those who undertake “promotional work that is incidental to sales made, or to be made, by someone else” and, as such, do not primarily engage in sales.

The employer, however, posited that the primary duty of its PSRs is indeed sales. In this regard, GSK argued that while it is true that federal law bars PSRs from selling prescription products directly to end users (patients), PSRs engaged in “selling” to physicians – the real “customers” who are the only people authorized under federal law to write prescriptions and thus facilitate sales to the end user. Although PSRs do not transfer title of the product to physicians, PSRs’ primary duty is to sell by encouraging physicians to write prescriptions for the company’s products which, in turn, result in a sale.

The Supreme Court affirmed the decision of the Ninth Circuit that Glaxo PSRs were primarily engaged in the duty of selling, and thus were properly classified as exempt under the FLSA’s “outside sales” exemption. Specifically, the Court reasoned that the FLSA exempts anyone “employed . . . in the capacity of [an] outside salesman.” The Supreme Court found that the statute’s emphasis on “capacity” counseled “in favor of a functional, rather than a formal, inquiry, one that views an employee’s responsibilities in the context of the particular industry in which the employee works.” Further, the Supreme Court found that the statute defines “sale” more broadly than either the petitioners or the DOL. The limits the DOL would impose, the Court stated, “confine the phrase to dispositions involving ‘contract[s] for the exchange of goods or services in return for value,’ [and] is much too narrow, as is petitioners’ view that a sale requires a ‘firm agreement’ or ‘firm commitment’ to buy. These interpretations would defeat Congress’ intent to define ‘sale’ in a broad manner and render the general statutory language meaningless.”

The Court also did not accept the sharp distinction between “selling” and “promoting” proffered by the petitioners and the DOL, rejecting the concept that “an employee is properly classified as a nonexempt promotional employee whenever there is another employee who actually makes the sale in a technical sense.” Again, the Court found this “formalistic” approach inconsistent with the broad concept of sales under the FLSA. The Supreme Court found further support for applying the outside sales exemption in the fact that PSRs bear “all of the external indicia of salesmen.” The PSRs are hired for their sales experience. They are trained to close each sales call by obtaining the maximum commitment possible from the physician. They work away from their office, with minimal supervision, and they are rewarded for their efforts with incentive compensation.

Finally, the Supreme Court noted that applying the outside sales exemption to PSRs comports with the purpose of the FLSA’s outside sales exemption, which is “premised on the belief that exempt employees ‘typically earned salaries well above the minimum wage’ and enjoyed other benefits that ‘set them apart from the nonexempt workers entitled to overtime pay.’” The PSRs in Christopher earned an average of more than $70,000 per year and spent between 10 and 20 hours a week outside normal business hours performing work related to their assigned sales territory, which the Supreme Court found “are hardly the kind of employees the FLSA was intended to protect.”

The Christopher decision is an important and favorable ruling for employers. Not only does it interpret the outside sales exemption in a functional context based on the FLSA’s broad definition of the term “sale,” but it also sends a clear message to the DOL that retroactive changes in its regulatory interpretations, without fair warning to those subject to the regulations, are unacceptable and cannot be used to impose liability. Littler is preparing an ASAP further discussing the Christopher decision and its impact on the pharmaceutical and others industries, and will provide a link when the ASAP is available.