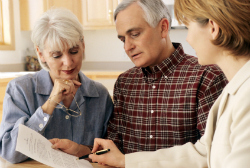 In Arnold v. Mutual of Omaha Insurance Company, a California appellate court issued a published decision holding that insurance agents are not employees under the California Labor Code. This appears to be the first time the court has addressed the status of insurance agents.

The plaintiff filed a putative class action asserting that she was misclassified as an independent contractor and therefore denied reimbursement of business related expenses under Labor Code section 2802, and was not paid all wages in a timely fashion. She also asserted that failure to pay business expenses constituted an unfair business practice.

The trial court granted the defendant summary judgment, finding that the plaintiff was an independent contractor under the common law standard set forth in S. G. Borello & Sons, Inc. v. Department of Industrial Relations, 48 Cal. 3d 341 (1989), and therefore not entitled to business expense reimbursement or timely payment of wages.

The plaintiff appealed, asserting it was error to apply the common law standard rather than the broader statutory standard under Labor Code section 2750. The court rejected the plaintiff’s contention, stating that “section 2750 does not supply such a definition of ‘employee’ that is clearly and unequivocally intended to supplant the common law definition of employment for purposes of Labor Code section 2802.”

The court then upheld the determination that the plaintiff was an independent contractor under the common law. It found that Mutual’s managers made themselves available to assist agents, but did not supervise them, offered training, but did not make it mandatory, and offered software as a “best practice.” Facilities were offered to agents, who paid a fee for use. While paid at regular intervals, there was no guarantee of compensation. Her appointment was non-exclusive, and she was free to sell other companies’ policies. She was engaged in a distinct occupation requiring licensing by the Department of Insurance, paid all her own expenses, provided her own tools, and the parties believed they were forming an independent contractor agreement. Also, the court noted that while the contract was “at-will,” such clauses could be included in independent contractor agreements. The court thus concluded that there was sufficient evidence to support the trial court’s grant of summary judgment.