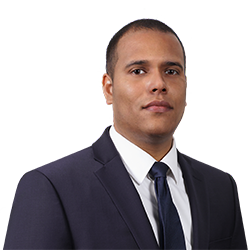 Miguel’s employment litigation experience extends to single and collective wage and hour actions, as well as discrimination, retaliation, harassment, whistleblowing and noncompete and breach of contract claims. He advises clients across a range of industries, including agriculture, hospitality, shipping, real estate and sports. He has extensive litigation experience representing domestic and international clients in state and federal courts throughout the state of Florida and across the country.

Among his accomplishments on behalf of clients are the following:

Prior to law school, Miguel was a trademark administrator in the legal department of a global consumer goods company, with responsibility for trademark clearance, preparation and prosecution for thousands of protected brands. He worked with general counsel and outside counsel to manage the company’s portfolio and trained U.S. and Canadian marketing teams on compliance with labeling and advertising requirements. He also reviewed and analyzed state laws governing pharmaceutical marketing to healthcare providers and assisted with the development of internal compliance manuals that were used by regional sales teams.

As a native Spanish speaker, Miguel enhances his client service with the ability to analyze and interpret legal documents, contracts and other communication from companies and courts across Central and South America.

Back to Basics: Employment Law 101