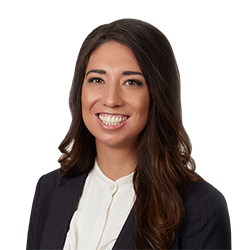 Kelsey E. Stegall advises and defends employers in a variety of labor and employment matters including:

Kelsey diligently represents her clients in litigation. Examples of her litigation experience include:

Kelsey also proactively assists employers with reviewing and drafting their employment contracts, handbooks, and policies, including providing clients advice on noncompete agreement content and enforceability. She has additionally advised clients on a broad range of employment issues, including investigations, discipline and termination, and disability accommodation requests. Kelsey actively participates in providing presentations and writing articles on developing employment law issues and trends in order to keep her clients apprised of these novel topics.

Prior to joining Littler, Kelsey clerked for two years in federal court for the Hon. Chief Judge Gloria M. Navarro of the U.S. District Court for the District of Nevada. In law school, Kelsey served as vice president of UNLV’s exclusive moot court team, the Society of Advocates, and as notes editor of the Gaming Law Journal.

CALI Excellence for the Future Award

Nothing Ventured, Nothing Gained: New Employment Laws in Nevada

The Competition over Revising and Enforcing Noncompete Agreements in Nevada