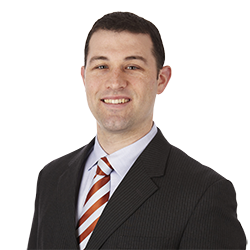 Joseph M. Wientge, Jr. represents employers in the areas of labor and employment law and education law in venues ranging from investigations to administrative agency proceedings, to litigation in state and federal courts.

Litigation
Joe has over twelve years of experience resolving state, federal and appellate matters, in litigation and arbitration, including:

Administrative Proceedings
He has successfully defended employers in all phases of litigation, including motions to dismiss, motions for summary judgment, trial/arbitration hearing and on appeal. Joe has guided clients through administrative investigations and hearings before:

Counseling
Joe regularly advises employers on hiring, discipline and termination procedures. He counsels employers on creating or revising employment policies and handbooks, separation agreements and employment contracts. He also conducts training and seminars on a wide variety of employment and education-related topics.

Prior and Academic Experience
Prior to joining Littler, Joe worked for two other law firms in St. Louis, where his focus was education and labor and employment work. In law school, he was a note and comment editor for the UMKC Law Review and placed second in the regional competition of the American Bar Association (ABA) Negotiation Team.