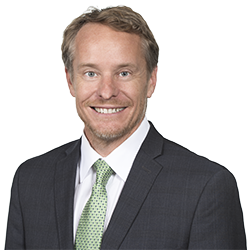 James Hart represents and counsels public and private sector employers in a wide range of employment and labor matters, with experience in all facets of the litigation process, from initial investigation and filing through trial and appeal. He practices in federal and state courts in California, both at the trial and appellate level, and before the Department of Fair Employment and Housing, the Department of Labor, the California Division of Labor Standards Enforcement and the Workers' Compensation Appeals Board. He has specific experience with:

Additionally, James has assisted with internal human resources investigations of employees, audits of company policies, and other ongoing employee matters, such as workplace violence restraining orders. He also provides his clients with compliance counseling.

James conducts training on harassment, termination procedures, wage and hour and other issues. He regularly presents for the Continuing Education of the Bar. A founding member of Littler's Orange County office, he is active in the international employment law activities of the firm.

Prior to joining Littler, James practiced criminal law as a deputy attorney general in the California Attorney General's Office. While there, he prosecuted felonies and misdemeanors and defended criminal convictions on appeal and in habeas corpus proceedings. He also participated in an exchange program with the Los Angeles City Attorney's Office, worked in the business affairs department at an entertainment company and worked in the music industry. James was an extern to the Hon. Consuelo B. Marshall of the U. S. District Court for the Central District of California.

No Boundaries for California Overtime Laws?

The Future Of PEOs and Employment Class Action Litigation

Preparing the Workplace for a Pandemic

English Only Rules In The Workplace

Who’s There? What to Do When the Government Is Knocking on Your Door - An Employer’s Guide to Handling Government Visits and Information Requests

Changes Made to the Way You Pay Your Employees: Temporary Employees, Overtime and Bonuses

Will A New Exception To Worker's Compensation Emerge?

Trends In Personal Liability for Corporate Officers, Directors and Managers in Employment Litigation

Breaking Up Is Hard to Do: Managing Challenges that Arise When the Employment Relationship Ends

Payrolls, Politics, Privilege, Predators and Other Predicaments in Today’s Workplace

Mental Illness and the ADA: What Employers in the Retail Industry Need to Know

Terminating Employees With Dignity and Respect