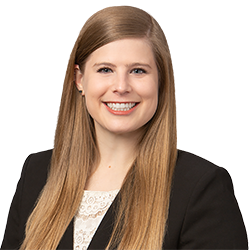 Prior to joining Littler, while with an AmLaw 100 firm Courtney represented companies in claims of discrimination, retaliation, harassment, wage and hour violations, and other actions under Title VII of the Civil Rights Act of 1964, Americans with Disabilities Act (ADA), Age Discrimination in Employment Act (ADEA), Fair Labor Standards Act (FLSA), and other federal and state laws, both at the administrative level and in litigation. She also investigated and handled administrative charges and mediations with the Equal Employment Opportunity Commission (EEOC).

During law school, Courtney externed for the Hon. U.S. Magistrate Judge Jeffrey C. Manske of the U.S. District Court for the Western District of Texas.