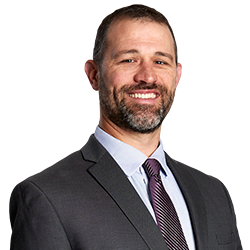 Joseph M. Wientge, Jr. is Co-Chair of Littler’s Arbitration Practice Group, while also utilizing his extensive experience to represent employers in venues ranging from investigations to administrative agency proceedings, to litigation in state and federal courts.

Arbitration
In his role as Co-Chair, Joe counsels clients on all manner of issues regarding the drafting and enforcement of employment arbitration agreements. Joe also has experience successfully arguing arbitration enforcement issues in trial court and in Courts of Appeal.

Litigation
Joe has significant experience successfully resolving state and federal matters through motions to dismiss, motions for summary judgment, at trial, and on appeal, including:

Counseling
Joe regularly advises employers on hiring, discipline and termination procedures. He counsels employers on creating or revising employment policies, separation agreements, and employment contracts. He also conducts training and seminars on a wide variety of employment and education-related topics.

Prior and Academic Experience
Prior to joining Littler, Joe worked for two other law firms in St. Louis, where his focus was education and labor and employment work. In law school, he was a note and comment editor for the UMKC Law Review and a member of the American Bar Association (ABA) Negotiation Team.