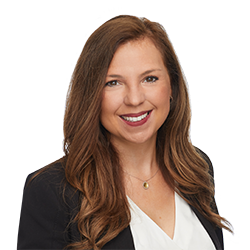 Jennifer Schilling represents clients in a broad range of labor and employment matters, including class and collective actions, as well as single and multiple plaintiff litigation involving matters of:

Jennifer routinely represents clients in union grievance arbitrations involving contract interpretation and just cause termination. She has extensive experience with litigation before federal and state courts and regularly appears before administrative agencies including the Equal Employment Opportunity Commission, the Illinois Department of Human Rights, and the State of Wisconsin Department of Workforce Development-Equal Rights Division. Jennifer routinely assists clients with various forms of Alternative Dispute Resolution, such as private and agency-based mediation, as well as court-sponsored settlement conferences. Among litigation matters, Jennifer handles issues arising under:

Additionally, Jennifer counsels clients on workplace issues such as terminations, leaves of absence, drug testing, wage garnishments, and policy review. She has managed numerous large scale reductions-in-force, including adverse impact and disparate treatment assessments, and has trained other attorneys in her field on detailed procedures to minimize legal risks regarding reductions-in-force. She also:

Prior to working at Littler, Jennifer spent seven years working at one of the largest law firms in the world. During her tenure, she advised that firm's international offices on U. S. labor laws; worked with corporate attorneys conducting due diligence labor and employment reviews regarding large scale and multi-million dollar mergers and acquisitions; and provided litigation, advice and counseling regarding virtually all areas of labor and employment law.

In law school, Jennifer served as a judicial extern for the Honorable Magistrate Judge Arlander Keys of the Northern District of Illinois, and she also completed internships with the Cook County Public Defender's Office and the National Organization for Women. She was actively involved with the National Moot Court Team, was a writer and editor for the Loyola Consumer Law Reporter, served as president of the Women's Law Society, and was a London Advocacy Scholar.

Illinois Returns to Work with Certain Conditions and Employer Requirements

High Times in Illinois: A Workshop Providing Guidance on Changing Policies and Practices in the Illinois Workplace to Comply with New Laws Regarding Recreational Use of Marijuana