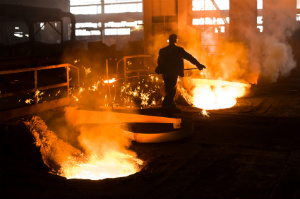 In a case that explicitly acknowledges a consequential circuit split, the Seventh Circuit Court of Appeals has concluded that the time that an employee spends walking from the locker room to his work station after changing into work clothes is not compensable if the applicable collective bargaining agreement does not require compensation for the time spent changing clothes. Sandifer v. United States Steel Corporation, Nos. 10-1821, 10-1866 (7th Cir. May 8, 2012). The Seventh Circuit’s decision acknowledges a contrary holding in Franklin v. Kellogg Co., 619 F.3d 604 (6th Cir. 2010), but concludes that the Sixth Circuit was “clearly wrong.” The Seventh Circuit also considered and rejected the Department of Labor’s position, as articulated in recent opinion letters and in a brief filed as amicus curiae on the plaintiffs’ behalf, finding that the Department’s “gyrating agency letters” offered little to assist the court in its deliberations other than a political perspective on the law, and therefore were entitled to no deference.

The case focuses on the impact of Section 3(o) of the federal Fair Labor Standards Act, 29 U.S.C. § 203(o), which excludes “any time spent in changing clothes or washing at the beginning or end of each workday” from working time, if such time is excluded by the express terms or by custom or practice under a bona fide collective bargaining agreement. U.S. Steel’s hourly employees complained that they were owed additional wages for time spent putting on and taking off protective gear in a locker room, and walking to and from the locker room to their work stations. The applicable collective bargaining agreements did not require compensation for changing clothes, and the district court found that the exclusion under Section 3(o) applied. The court determined that the travel time to the employees’ work stations may be compensable, however, but certified the issue for appeal. The Seventh Circuit accepted the appeal.

In its opinion, the Seventh Circuit first concluded that the district court correctly decided that the protective gear worn by U.S. Steel employees consisting of flame-retardant pants and jacket, work gloves, work boots, a hard hat, safety glasses, ear plugs and a hood, were plainly work clothes for the most part, and therefore “clothes” under the Act. To the extent the hard hat, glasses, and ear plugs were not technically “clothes,” the court summarily dismissed an argument that putting on this particular equipment qualified as compensable “work” because the time spent in such activity was de minimis. Accordingly, U.S. Steel was not required to compensate its employees for the time spent changing into and out of work clothes.

If clothes-changing time was not compensable, the Seventh Circuit decided that to require the employer to pay for the travel time – walking between the locker room and the work station – was “puzzling and paradoxical.” The court noted that the Portal-to-Portal Act, 29 U.S.C. § 254, rendered time spent “walking, riding, or traveling” to and from the place an employee performs his “principal activity” non-compensable. If Section 3(o) had not applied, thereby making clothes-changing time compensable as a principal activity, the travel time would likewise have been compensable. But here, the employer and union had decided that clothes-changing time was not work time, and therefore need not be compensated. Therefore, changing clothes could not be a “principal activity” that the employee was employed to perform.

The Seventh Circuit noted the Supreme Court’s decision in Steiner v. Mitchell, 350 U.S. 247 (1956), holding that when an employer requires an employee to don and doff work clothes at the workplace, then donning and doffing are integral and indispensable to the employee’s primary duty, and therefore compensable under the Act. The Supreme Court’s decision in IBP, Inc. v. Alvarez, 546 U.S. 21 (2005), extended this holding to conclude that time spent walking from a principal activity (changing clothes) to a work station is likewise compensable, and not within the exemption created by the Portal-to-Portal Act. But the Steiner Court noted the significance of the fact that there was no collective bargaining agreement in place that would make clothes-changing time non-compensable in that case. Section 3(o) permitted the parties by agreement to take clothes-changing time outside the scope of the employee’s “principal activity,” which is exactly what U.S. Steel and its unions had done. Because clothes-changing was non-compensable and not a “principal activity,” walking to the employees’ work stations was likewise non-compensable under section 254. The Seventh Circuit further grounded its analysis in the stated legislative purpose for enacting the Portal-to-Portal Act in 1947, and Congress’s concern with the disruption of the workplace caused by a series of Supreme Court decisions that had forced employers to compensate for travel time and clothes-changing time.

Finally, the Seventh Circuit acknowledged the shifting positions articulated by the U.S. Department of Labor on the meaning of the term “clothes” in Section 3(o) of the Act, and the compensability of travel time under these circumstances. During the Clinton Administration, the Department took a narrow view of the term, but broadened its definition in a subsequent opinion letter issued during the Bush Administration. After the change in administrations in 2009, the Department reverted to its earlier position, and also rejected the Bush Administration’s position on “principal activity.” Although “[s]uch oscillation is a normal phenomenon of American politics,” the Seventh Circuit found nothing in the Department’s position that could assist the court in determining the legal question – other than an echo of the plaintiff’s arguments and a noted disagreement with the previous administration’s position. Under these circumstances, the court concluded that it owed no deference to the Department’s interpretation of the statute.