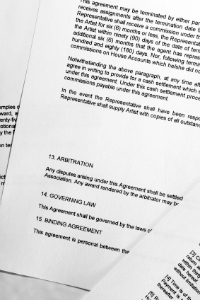 Relying on AT&T Mobility, LLC v. Concepcion, 131 S. Ct. 1740 (2011), the U.S. Court of Appeals for the Fourth Circuit held on April 1, 2013 that an arbitration provision in a franchise agreement prohibiting signatories from participating in class and collective actions is lawful in light of the clear federal directive in support of arbitration. In Muriithi v. Shuttle Express, Inc., the Fourth Circuit further found that: (1) an agreement that provides for a split in the cost of arbitration must be analyzed on a case-by case basis; and (2) a truncated statute of limitations contained outside of the arbitration clause should be reviewed by the arbitrator. The court’s decision overturned the District Court of Maryland’s March 2011 pre-Concepcion ruling that the arbitration agreement was “so permeated by substantively unconscionable provisions” that it was unenforceable. The plaintiff, a driver for a passenger shuttle service, had alleged that he and other putative class members were improperly classified as “franchisees” or “independent contractors,” and were therefore entitled to minimum wage and overtime pay under the FLSA.

The court first addressed the enforceability of the class action waiver in light of Concepcion. In Concepcion, the U.S. Supreme Court upheld a class action waiver in an arbitration agreement and invalidated a state law that conditioned the enforceability of such an agreement on the availability of class-wide arbitration. Although the plaintiff argued that Concepcion was inapposite because its holding should be limited to the preemption of a California state law, the Fourth Circuit found that “Concepcion sweeps more broadly,” and that its holding “was not merely an assertion of federal preemption, but plainly prohibited application of the general contract defense of unconscionability to invalidate an otherwise valid arbitration agreement.”

Next, the court found that the plaintiff failed to meet his burden to show that the fee-splitting provision would prevent him from vindicating his statutory rights (he merely offered evidence of what arbitrators were charging in another locale and offered no evidence of the value of his claim). Lastly, the court found that the challenge to the one-year limitations provision should not have been decided by the district court because the term was applicable to the franchise agreement generally and not part of the arbitration clause. As a result, and because the scope of a motion to compel arbitration is restricted to challenges specific to the arbitration clause, the plaintiff’s challenge to the limitations period should be decided by an arbitrator.

This opinion is significant because it is yet another federal appellate court opinion upholding a class action waiver in the context of a collective action, and it articulates an expansive view of the holding of Concepcion.