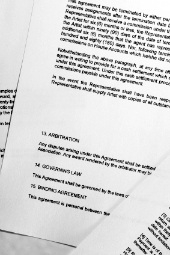 While arbitration agreements are generally enforceable in the Fourth Circuit, a Maryland court recently denied a motion to compel arbitration in a collective action based on three provisions the court believed were “unconscionable. In Gadson v. Supershuttle International employees filed a collective action under the FLSA alleging that the employer misclassified them as independent contractors. In response, the employer filed a motion to compel arbitration because the plaintiffs had executed franchisee agreements that contained a provision to arbitrate disputes arising from the agreement. Plaintiffs opposed the motion asserting that the following three provisions were unenforceable: (1) fee splitting; (2) prohibition of class actions; and (3) truncating the statute of limitations. The court agreed and held that the “severability” clause could not save the agreement because it would require “a near rewrite of the contract.”

The court found the fee splitting provision unlawful because the individual recovery for each plaintiff was projected to be far below the cost of the arbitration. To support this argument, Plaintiffs provided the court with their tax returns which demonstrated that they would not be able to afford the arbitration.

Next, the court considered whether the prohibition of a class action voided the agreement. Notably, the Fourth Circuit in Adkins v. Labor Ready, Inc. had already addressed the issue and held that an arbitration agreement precluding class actions, and specifically a collective action under the FLSA, is not per se unlawful in light of the clear federal directive in support of arbitration. In this case, however, the court found that, in conjunction with the fee splitting provision, it would likely be that “no individual suits” would be brought except as a collective action under the FLSA.

Lastly, the court found that the provision truncating all statutes of limitations to one year would prevent Plaintiffs from vindicating their statutory rights, although the court recognized that some limitation periods may be shortened by agreement. Relying on Ninth Circuit precedent in Davis v. O’Melveny & Myers, the court held that a strict one year limitation period for employment-related statutory claims is oppressive in an arbitration context.

This case suggests that an employer may include one of the above provisions in an arbitration agreement, but not all three. In addition, the court left open the question of whether parties could agree to a two-year statute of limitations on some claims.