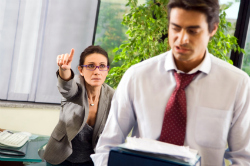 The Fair Labor Standards Act (FLSA) provides that an employer may not: “discharge or in any other manner discriminate against any employee because such employee has filed any complaint or instituted or caused to be instituted any proceeding under or related to [the Act], or has testified or is about to testify in such proceeding, or has served or is about to serve on an industry committee.”

The meaning of the phrase “filed any complaint” was recently clarified by the U.S. Supreme Court in Kasten v. Saint-Gobain Performance Plastics Corp. to include unwritten, oral complaints as long as “a reasonable, objective person would have understood the employee to have put the employer on notice that the employee is asserting statutory rights under the Act.” While the Supreme Court seemed to have decided by implication whether “filed any complaint” includes internal complaints to the employer, the majority in Kasten stated that it was declining to reach the conclusion, leaving the circuit split on that issue unresolved. The Fourth Circuit took up the issue of “internal complaints” in Minor v. Bostwick Laboratories Inc.

In that case the plaintiff worked as a medical technologist for Bostwick Laboratories. The plaintiff claimed that she and several coworkers met with the company’s chief operating officer to report that their supervisor was altering their timesheets to reflect that they had not worked the overtime that they had recorded, when they had worked the overtime hours. According to the plaintiff, the chief operating officer told them that he would look into the issue, but rather than resolving it, her employment was terminated on the following Monday. The plaintiff sued Bostwick Laboratories in the Eastern District of Virginia, claiming FLSA retaliation, among other things. Bostwick Laboratories moved to dismiss the complaint on the ground that an employee’s informal internal company complaint regarding a possible FLSA violation was not protected activity under the FLSA. The district court agreed, based on the then-precedential Fourth Circuit decision in Ball v. Memphis Bar-B-Q Co., and without having the guidance yet of the U.S. Supreme Court’s decision in Kasten, and dismissed the complaint. The plaintiff appealed.

The Fourth Circuit reversed, holding that “filed any complaint” includes internal company complaints, joining the First, Third, Sixth, Seventh, Eighth, Ninth, Tenth and Eleventh Circuits and leaving the Second Circuit’s minority position on this issue in doubt. In reaching its decision, the Fourth Circuit reasoned that protecting internal company complaints would further the remedial purposes of the FLSA and was consistent with agency enforcement positions.