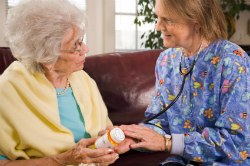 In one of many recent Department of Labor (DOL) enforcement actions against the home health care industry, a federal court entered a consent decree ordering Aspen Nursing Services Inc. to pay $210,000 in back pay and liquidated damages to 22 employees. Aspen provides home health aides for individuals with disabilities in Kentucky and Ohio.

Following an investigation by its Wage and Hour Division (WHD), the DOL filed an FLSA lawsuit against Aspen alleging that the employees, who were in-home caregivers, did not receive the federal minimum wage for every hour worked and that they did not receive overtime when they worked more than 40 hours in a week. The DOL also alleged that Aspen failed to keep accurate records.

This case is just one example of the WHD’s increased investigation and enforcement activity in the residential health care industry.  The DOL’s particular focus in this and other similar cases was the practice of paying its employees flat daily rates instead of hourly rates and the failure to pay overtime. Other recent enforcement actions by the DOL have targeted failure to pay in-home caregivers and nurses’ aides for travel time between work sites, incorrect calculations of the overtime rate, failure to combine hours worked for multiple locations  in calculating an employee’s hours worked, child labor violations, and misclassification of employees as independent contractors.

In addition, as part of its We Can Help campaign, the DOL announced it is placing “a special focus on reaching employees” in home health care and other traditionally lower-wage industries. The campaign’s goal is to educate workers about their rights and encourage them to file complaints, which will inevitably lead to more investigations and lawsuits.  The DOL has created specific information designed to educate health care workers.

This increased enforcement activity is occurring while the DOL seeks to expand the FLSA’s coverage to more than a million domestic caregivers under a new proposed rule. Given these trends, home health agencies and other health care providers are encouraged to review their pay and recordkeeping practices now, even before the enactment of a final rule regarding minimum wage and overtime requirements for in-home care workers, to ensure compliance with current state and local laws.