Dear Littler: Love Is In the (Recirculated) Air – How Do We Handle Office Romances?

By Helene Wasserman on

This Dear Littler was originally published in February 2019.

Dear Littler: I run HR for a business with locations across the West Coast. One of our store managers, Romeo, called today to inform me that he is now dating the assistant manager, Juliet, at his location in Los Angeles. I hate to crush young love, but this relationship seems wildly inappropriate. How do I handle this uncomfortable situation?

— Hardened in Half Moon Bay

Dear Hardened in Half Moon Bay,

Even when it’s not Valentine’s Day, workplace romances are extremely common. According to surveys,1 more than half of employees report having dated a coworker at some point. People spend a lot of time at work, so it’s not surprising that Cupid’s arrow strikes while couples are on the clock.

Although office romances are not unusual, they create a whole host of legal and practical concerns for employers. I’ll walk you through some of the key issues, but fear not! Coworker romance may be unavoidable and unpredictable, but it is not unmanageable.

At the outset, employers facing this situation should remember their role. It’s important to stay professional (despite any swirling gossip) and focus on what action may be necessary. Ultimately, behavior that happens at work or affects the workplace is your employer’s business—but off-duty conduct that does not affect the office presumably is not.

Many employers maintain some sort of policy concerning romantic relationships at work. While businesses might wish to ban all coworkers from dating, there are a few serious problems with that approach. First, it’s not very realistic from an enforcement perspective. Even if they wanted to (a big “if,” to be sure), employers simply are not in a position to police what their employees do after hours. And employees surely would not appreciate an employer inviting itself into their personal lives.

Second, such a policy can have unintended, negative consequences. Say your employer adopts such a policy, and then it learns that two of its best employees are dating. Does the employer have to discipline or fire these valued workers? Employers might want to shy away from any policy that could backfire and lead to outcomes that can hurt all involved.

Third, a strict prohibition on coworker dating may violate the law if applied to all staff. In your home state of California, and a handful of other jurisdictions, an employer may not take adverse action against an employee who has engaged in “lawful conduct occurring during nonworking hours away from the employer’s premises.”2 In other words, because it is legal for two adult peers to date (as opposed to taking up a Bonnie and Clyde lifestyle), a California employer cannot punish them for participating in lawful conduct away from work. Although, as discussed below, different rules may apply to supervisory personnel, like Romeo.

From an employer’s point of view, love is a battlefield (and not a many-splendored thing) if a supervisor and subordinate are involved. Numerous problems can arise if employees in a reporting relationship become romantically linked. This type of intimate relationship—even if the reporting connection is indirect—can damage morale, create significant distraction, undermine the credibility of the couple involved, reduce productivity, and generate concerns about favoritism and harassment. For example, even if the couple is perfectly content and well-behaved in the office, coworkers may question decisions by them or involving them, such as a promotion to the lower-ranking partner.

To avoid these dilemmas, employers commonly forbid employees from entering into romantic or intimate relationships with any coworker if they supervise the coworker or if they are in a position where they may affect the compensation or terms and conditions of employment of the other individual. Many employers also impose this condition on any relationship (even if not supervisory) where a similar conflict, or the danger of a conflict, exists.

Despite the protections mentioned above for individuals participating in lawful off-duty conduct, California employers, too, may consider a policy restricting employees from dating colleagues who report to them. California courts have recognized that “employers have legitimate interests in avoiding conflicts of interest[, and] . . . reducing favoritism or even the appearance of favoritism” and that “managerial-subordinate relationships present issues of potential sexual harassment.”3

Consistent with these principles, many businesses adopt policies that require employees to inform HR (or other designated personnel) if they enter into a romantic relationship with a subordinate. These policies also typically obligate the couple to inform the employer if their personal relationships ends. That step, though perhaps awkward, enables the employer to understand any future developments and take appropriate action as needed. If the couple tells HR that they broke up, for example, and one party then engages in arguably harassing conduct, the employer will be on notice that the relationship is no longer consensual and that all such conduct is unwelcome.

When a conflict or apparent conflict arises in personal relationships, employers also routinely separate the parties, such as by reassignment. If no such accommodation is possible, the employer may ask for the couple to end their romantic involvement, or for one of the individuals to resign. In any event, employers should consider how they can eliminate any conflict and risks associated with such a workplace romance.

With all that in mind, Dear Hardened in Half Moon Bay, you could start addressing the situation with Romeo and Juliet by reviewing your employer’s policies. If no relevant policy exists, consider whether it’s time to adopt some rules on this subject. If your employer already has a policy about dating, perhaps revisit it to make sure it complies with applicable state law and continues to suit your employer’s needs.

Of course, if you have a current, satisfactory policy, you’ll want to apply it to Romeo and Juliet in a fair manner. All policies generally should be enforced consistently and evenly to avoid any claims of favoritism or discrimination.

The heart may “want what it wants” out of an office romance, but employers usually just want the heartburn to end. As a result, and in addition to any pertinent policies, some employers ask dating coworkers to execute a special agreement related to their relationship, known as a “love contract.” While certainly not required, your employer might wish to consider whether such a contract might be appropriate in your current or subsequent situations.

“Love contracts” can include numerous provisions. Many such contracts incorporate the company policy on dating, confirm that the parties are not in a reporting line, or ask the parties to represent that their relationship is entirely consensual. These agreements might require the parties to refrain from any inappropriate, amorous conduct or speech while at work or to report any misconduct or harassing behavior to the employer.

Some “love contracts” also include release or waiver language. The employees might, for example, agree to submit any disputes arising out of their relationship to arbitration. Or an agreement might ask the couple to surrender their rights to sue or to receive any money damages for claims arising during their relationship (e.g., claims for discrimination, harassment, retaliation, breach of contract, etc.). As you can imagine, I can’t predict the validity of such terms because that question would turn on the particular contractual provisions, other facts, and state and federal law.

That being said, because your employer has operations in California, you should be aware that recent changes to the law there limit the enforceability of certain waivers or releases.4 For example, SB 1300, effective January 1, 2019, curtails an employer’s ability to use non-disparagement clauses and particular waivers for claims asserted under the California Fair Employment and Housing Act. The statute makes it unlawful “for an employer, in exchange for a raise or bonus, or as a condition of employment or continued employment” to “require an employee to sign a release of a claim or right,” including any release covering claims against an employer, the right to file and pursue civil action, or the ability to notify any court, law enforcement, or governmental agency. SB 1300 also prohibits non-disparagement or other agreements that would “deny the employee the right to disclose information about unlawful acts in the workplace, including, but not limited to, sexual harassment.” Employers in the Golden State should consult with counsel and proceed cautiously with any employment agreements—including “love contracts”—that might include language contradictory to the new laws.

In your specific instance, Dear Hardened in Half Moon Bay, it sounds like Romeo and Juliet are in a direct reporting relationship. When making a decision about how to proceed, you’ll likely want to consider company policy, operational needs, possibilities for reassignment (or some other means to mitigate the conflict), and the preferences of Romeo and Juliet. I hope you are able to find a mutually-agreeable solution that complies with your corporate practices as well as applicable state law. Best of luck, and Happy Valentine’s Day! 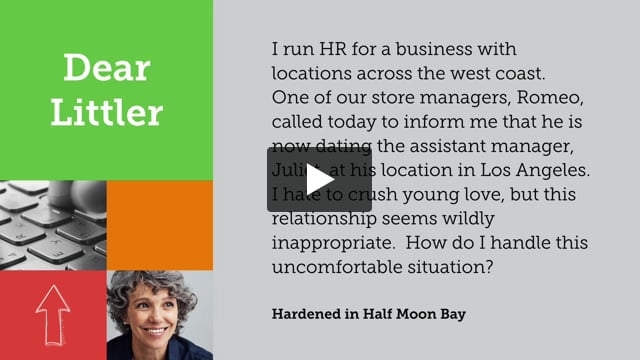 Discrimination and HarassmentPolicies, Procedures and Handbooks