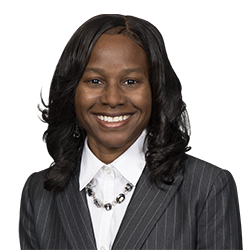 Karimah J. Lamar advises and defends clients in matters involving labor and employment law. She is devoted to helping employers navigate the complexities of employment law. Karimah has extensive experience representing clients in federal and state courts in disputes and allegations concerning wrongful termination, claims of discrimination and harassment, retaliation, wage and hour disputes ranging from payment of wages to meal and rest breaks, class actions, PAGA claims, and other labor and employment litigation.

She has successfully achieved summary judgment and summary adjudication on various discrimination and harassment claims, including establishing that plaintiffs are not entitled to indefinite leaves of absence.

Karimah also successfully argued a case on appeal that resulted in a published decision and established that certain employers have absolute immunity when reporting suspected elderly abuse by employees.

Advising employers on compliance with the labor and employment laws is a significant area of Karimah’s practice. She counsels employers on compliance strategies involving wage and hour laws, the WARN Act, and family and medical leave laws. Karimah also assists employers with developing and implementing litigation-avoidance approaches. To this end, she provides ongoing advice and counsel to ensure employers are compliant with applicable statutes and regulations. In support of her advisory role, Karimah regularly drafts employee handbooks and other personnel policies, as well as conducts training sessions on topics such as sexual harassment prevention, diversity, and conducting proper investigations.

Mandated Reporter Immunity Protects the Report, But Does it Protect Reporting-Related Conduct As Well?

Benefit of Counsel: Cleaning Up - Why Employers Should Care About Reforming California’s PAGA

Issues of Class Manageability Must Be Considered Before Certifying A Class

Marketing Success: How Did She Do That?

Employee Has No Obligation to Arbitrate

Returning to the Workplace

Key Issues for Easing the Pain of Being a California Employer

How to Conduct Proper Investigations

Employment Law Update from A to Z in California

The Devil's in the Details: How Workplace Investigations Tip the Scales in Litigation

Help Wanted: Legal issues to Consider in the Hiring Process