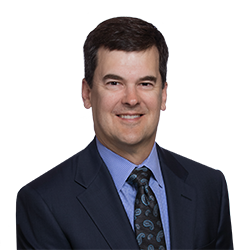 Brad Spalding is a trial lawyer who represents and counsels corporate employers regarding labor and employment issues. Brad is certified by the Texas Board of Legal Specialization in labor and employment law, has been designated a “Super Lawyer” by Texas Monthly magazine, and is named in The Best Lawyers in America©. Brad has been AV-rated by the Martindale-Hubbell Legal Directory since 2006. Brad served on the Labor and Employment Law Exam Commission for the Texas Board of Legal Specialization, and was appointed by Houston Mayor Annise Parker in June 2012 as chair of the city’s Civil Service Commission. His focus includes discrimination, wage and hour laws, privacy, unfair competition, non-compete and non-disclosure agreements, as well as claims arising under:

Additionally, Brad helps employers develop practices and programs to maintain and protect confidential information and trade secrets. He also advises clients on leave issues in connection with the Family and Medical Leave Act, advises clients with respect to plant closings and mass lay-offs under the Worker Adjustment Retraining and Notification Act, and advises clients on privacy issues with respect to background checks under the Fair Credit Reporting Act and best practices for protection of employees’ personal identifying information and prevention of security breaches.

Brad likes to spend as much time as possible outdoors, and summited Mt. Rainier in July 1997 and Mt. Kilimanjaro in December 2007. He also finished the Houston and New York City Marathons in January and November 2008, respectively.

Texas Board of Legal Specialization

Texas Board of Legal Specialization

Vice-President, Board of Directors

President, Board of Directors

Use of Camera Phones Becomes a Workplace Issue

Texas, Our Texas: The Latest Employment Law Developments in the Lone Star State

Sex Offenders, Terrorists, and Video Resumes: How Far Can You Go to Get Information on Prospective and Current Employees

Electronic Evidence: With a Key Stroke the Evidence Disappears…as Does Your Case

Prosecution and Defense of Employment Cases at Trial