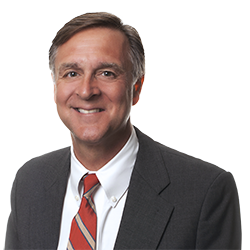 Additionally, Hal has handled several groundbreaking unfair competition cases in Missouri, and drafted the Missouri Dram Shop law, the constitutionality of which was upheld by the Missouri Supreme Court. He has litigated several cases to verdict or final arbitration. He has represented multiple Missouri sheltered workshops on a pro bono or reduced fee basis, in connection with wage and hour/personnel matters.

Hal served as counsel for the producer of the Emmy Award-winning documentary on the St. Louis Arch, and has represented multiple professional sports teams (including the St. Louis Cardinals and the St. Louis Blues) in contract negotiations, salary arbitrations and other matters for many years. He also works with:

He opened Littler's St. Louis office and previously served as office managing shareholder of that office for nearly nine years. Prior to working at Littler, he was the vice-chair of the labor and employment law practice group at another St. Louis firm. After law school, he clerked for United States District Chief Judge H. Kenneth Wangelin of the United States District Court for the Eastern District of Missouri.