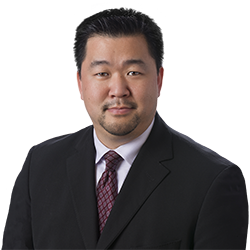 Edward H. Chyun advises and represents employers in various aspects of employment and labor law, including:

He has extensive experience handling and resolving a broad range of issues in state and federal courts at both the trial and appellate levels, as well as in arbitrations. Additionally, Edward regularly appears before the Equal Employment Opportunity Commission and the National Labor Relations Board. Edward also advises and counsels employers with day-to-day employment and labor relations concerns, and provides training on various employment and labor issues.

Further, Edward is committed to ensuring equal access and advancement opportunities in the legal industry. His commitment is demonstrated by his various leadership roles and activities. Edward currently serves as co-chair of the firm’s Diversity and Inclusion Council, and the firm’s ‘Ohana affinity group (which provides support, development and networking opportunities for Asian, South Asian, Middle Eastern, North African and Pacific Islander attorneys). Edward is a founding member and treasurer for the Asian American Bar Association of Ohio. He also served as the co-chair of the National Asian Pacific American Bar Association (NAPABA)’s Labor & Employment Committee, and was named a Fellow to Legal Counsel on Legal Diversity in 2016. In 2015, he was appointed to serve on the Ohio Supreme Court’s Language Services Committee, which works with the Ohio Supreme Court in improving access to the courtroom for non-English speakers and the hearing impaired. Edward has been recognized as a Rising Star, Super Lawyer and Best Lawyers in America since 2009.

The Diversity Center of Northeast Ohio

What is your name? A Conversation with Littler’s Immigrant Attorneys

Where in the USA is Erin Winnebago... Causing Your Next Wage and Hour Compliance Challenge?

The Legal Implications of the Wandering Worker

The EEOC: What to Expect from the New Administration

A Call to Collective Action; Dismantling Xenophobia and Racism Against the Asian American Community

Employee or an Independent Contractor? Heightened Scrutiny on Worker Classification, Including the Recent Dynamex Decision

Wage and Hour Update: Uncertainty in a New Administration and the Supreme Court Considers Arbitration Clauses

How to Determine Independent Contractor Status

College Student- Athletes: Are they Employees

Managing New Technology in the Workplace