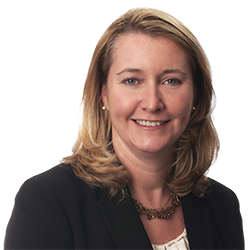 Barbara Rittinger Rigo focuses her practice on representing management in a wide range of labor and employment matters, including:

She is an experienced trial attorney and defends clients in all types of industries, including hospitality, pharmaceutical, financial services, health care, energy and transportation, in state and federal courts, as well as before administrative agencies such as the Equal Employment Opportunity Commission, the Pennsylvania Human Relations Commission, the National Labor Relations Board, the Department of Labor and state and federal departments of labor.

Barbara focuses a large part of her practice on counseling employers on day-to-day compliance with local, state and federal statutes, such as:

She is a frequent speaker on those and other topics. She also drafts and reviews employer policies and employment and severance agreements for clients spanning numerous industries.

Barbara serves as a member of the Discrimination Commission and the Human Relations Commission for the Township of Haverford. She is also a member of Littler Mendelson's Diversity Advisory Committee. Prior to joining Littler, she was an associate at two large firms in Pittsburgh and Philadelphia. In law school, she was a senior editor of the Dickinson Law Review.

Diversity of Thought as a Business Imperative

The Chamber of Commerce for Greater Philadelphia

Navigating the Use and Abuse of the FMLA

The Trial of a Retaliation Case

Dealing with a Problem Employee

Social Media Grows Up: The Safe, Legal, and Effective Business Use of Social Media

Dealing with a Problem Employee

How to Start Your Own Business