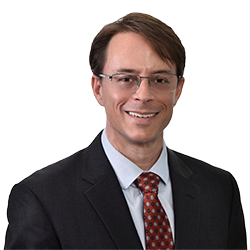 Ariën Koorn focuses his practice on unfair competition matters. Arie has successfully represented asylum seekers in immigration court, and he has experience in employment-based immigration law, eDiscovery, and contract review.

Arie is a former consular officer for the U.S. State Department. He served six years in Latin America, adjudicating more than 50,000 nonimmigrant visas and hundreds of immigrant visas in Mexico and Ecuador. In addition, he provided routine and emergency consular services to U.S. citizens – issuing passports, and visiting hospitals and prisons. In 2020, he assisted in the efforts to locate and repatriate U.S. citizens stranded by the pandemic.