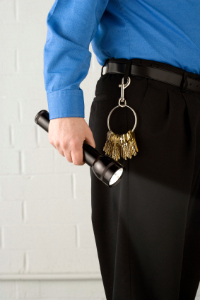 In the wave of class litigation flooding the courts in California claiming rest breaks were not permitted, one court recently denied class certification based on a common sense conclusion that the experience of a handful of guards could not be assumed to be the experience of thousands.

In a recent case, Temple v. Guardsmark LLC, two security guards sought penalties on behalf of a class of thousands of guards based on their employer’s alleged failure to provide “off-duty” rest periods and accurate wage statements.

The guards worked “solo” at various client sites and thus had no one to relieve them from duty for breaks. They alleged company policies prohibited them from leaving their posts to take ten minute rest periods, and they supported their motion for class certification with sworn declarations from fourteen guards saying they took no breaks. Defendant Guardsmark countered with 96 sworn guard declarations, each attesting to having regularly taken rest breaks, spending the time engaged in a wide variety of personal activities.

Faced with the dueling declarations, the question before the court was not whether Guardsmark in fact failed to legally provide rest periods, but whether the two security guards who sought to be class representatives could offer common evidence to prove that thousands of guards in fact were illegally denied rest breaks without trying the claims of each guard one-by-one. The court found that the guards had not shown they could resolve these claims based on “common proof.” The evidence instead suggested that many guards—at least the 96 who supported their employer—did in fact take rest breaks, and even the evidence offered by plaintiffs raised questions such as whether idiosyncratic directions of a lone wolf supervisor rather than a common company-wide policy was the reason for some employees being deprived of rest breaks.

The guards’ wage statement claim fared no better but for a different reason. The crux of this claim was that the wage statements did not specify how many hours guards worked beyond twelve hours in a day at “double time” or the wage paid at double time rates. For this alleged violation of the Labor Code, the guards sought civil penalties under California’s Private Attorney General Act (PAGA), which allows a single employee to seek penalties on behalf of all “aggrieved employees” for Labor Code violations. But to pursue such a claim in court, PAGA requires an employee to jump through a procedural hoop—pre-suit notification to the California Labor Workforce Development Agency (LWDA) of his or her claim. The plaintiff guard here had notified the LWDA of his rest break allegation, but he failed to mention any violation of the law requiring accurate wage statements. Having failed to jump through this hoop, the judge found that the plaintiff was not able to pursue this claim on a class basis, obviating the need for any analysis of the class certification request.

Rest break class actions have been among the most difficult to certify, and this case is yet another example of the individualized questions that arise when considering how and why some employees do not take rest breaks. This decision also demonstrates the value of employers being able to amass substantial evidence of compliance with the laws allegedly violated as well as proof of idiosyncratic supervisors or varying conditions that destroy the ability of plaintiff to offer common proof.

This entry was written by Alison Hightower.