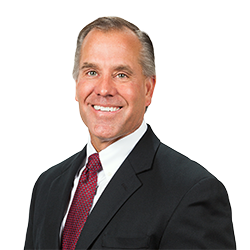 Patrick is the founding shareholder of Littler’s Nevada offices. He has litigated more than 500 employment lawsuits to conclusion. A highly-experienced trial attorney, he has successfully defended scores of jury trials and has handled numerous arbitrations and mediations. Companies frequently call upon Patrick to try difficult cases even when handled by other firms. Patrick regularly appears in state and federal courts and represents clients before the Equal Employment Opportunity Commission and various other states' administrative agencies representing employers in:

Various organizations have regularly recognized Patrick as one of the nation’s best employment and trial attorneys. He has obtained defense verdicts in scores of jury trials involving discrimination on the basis of race, age, national origin and disability; breach of contract; and single and multi-plaintiff sexual harassment cases. A small sampling of his notable litigation successes include:

One of Littler's premier speakers, Patrick trains and speaks on a variety of timely employment topics of interest, including:

Patrick has completed the Northwestern University Kellogg School of Management Leadership training. Active in firm management, he chairs the EPLI Committee and serves on the Diversity Advisory Group. He is a member of the Re-Engineering Committee, Profitability/Project Management Committee, the Career Advocacy Program Committee, and the Business Development Council Committee. He is a former member of Littler's Board of Directors, founding shareholder and former office managing shareholder of the Las Vegas and Reno offices, and former co-chair of the Hospitality Practice Group.

Named, A Leading Expert in the Employment Law Field

Why Creating a Community-Oriented Business Culture is a Great Investment

How To Handle A Major Health Issue At Work

The Accommodation Minefield: How The Rise In Disability Claims Complicates Leave Policies

Increased Class Action by EEOC: Discrimination and Leave Policies in the Workplace

Tapping the Untapped: Including Deaf Employees in the Workforce

Likeability: An Essential Element of Success In A Jury Trial

A Charge by Any Other Name, Is Still a Charge: High Court Adopts Broad Definition in Age Cases

Offensive Spam in the Workplace: Employers' Obligations and Liabilities

COVID-19 - Its Impact on Employment Litigation, How Best to Prepare Your Company, and What the Future of Litigation May Hold

Reopening Utah: Preparing for Anticipated Litigation in the Post-COVID World

Reopening Nevada: Preparing for Anticipated Litigation in the Post-COVID World

The Pay Equity Wave Continues: What You Need to Know to Stay Afloat

President Trump’s First 100 Days: What Does It Mean for Employers?

How to Conduct Lawful Investigations

Insurance Coverage of Employment Law Claims: How Employers and Insurance Carriers Can Work Together Effectively

The Employment Arena: An Insider's View