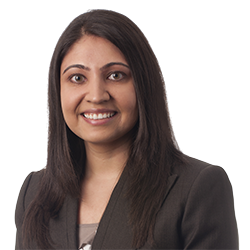 Nehal S. Anand is board certified in labor and employment law by the Texas Board of Legal Specialization. She advises and represents employers in a broad range of employment law matters arising under federal and state laws, including:

In 2017 and 2019, Nehal prevailed in two federal jury trials — single-plaintiff and multi-plaintiff — involving allegations of discrimination and FMLA violations against a healthcare company.

Nehal also assists employers with responding to administrative charges of discrimination before the Equal Employment Opportunity Commission and claims for unemployment benefits or unpaid wages before the Texas Workforce Commission. In addition, she counsels employers in best practices on employment law matters, including:

Nehal works with both large and small companies and often works with clients in the retail, healthcare, hospitality, staffing, and energy industries.

Nehal is a liaison for the firm’s Women’s Leadership Initiative.

During law school, Nehal served as a judicial intern for the Hon. David Hittner, U. S. District Judge, Southern District of Texas. In law school, she was a notes and comments editor for the South Texas Law Review and served as an advocate and brief-writer for the nationally-recognized South Texas College of Law Moot Court Team.

Recipient, Outstanding Debater and Researcher of the Year

The Revolving Door of Returning to Work in Texas

Schedules, Scarfs, and Shots, Oh My! Religious Accommodations in the Workplace

2018 Legal Update: Washington, the Supreme Court and Beyond…

ADA Accommodations and the Interactive Process

The DOL’s Final Rule on Overtime

Social Media and Beyond - Addressing Employee Conduct in 2015

Human Resource Law: What You Need to Know Now