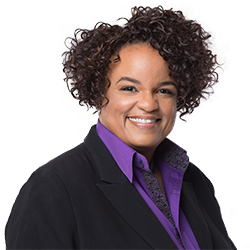 Dionysia Johnson-Massie is a litigator who focuses her practice on federal employment discrimination, harassment, retaliation and wage-hour litigation and strategic compliance issues, including diversity and inclusion strategies and matters arising under:

Dionysia uses a combination of legal skills and business acumen to offer her clients creative and cost-effective strategies that minimize exposure to a myriad of legal risks. She regularly provides advice and counsel on the practical and legal implications of everyday employment decisions. She also has extensive experience investigating potential legal issues and developing appropriate legal and compliance strategies for companies.

Through mediations, arbitrations, trials or summary judgment motions, she effectively resolves difficult and complex “bet the company” matters. She also has unique experience handling religious accommodation matters for employers in a variety of industries and promotion and tenure issues for educational institutions.

Dionysia has experience representing and counseling the following types of clients:

Dionysia has an emeritus role and serves in an advisory capacity to the firm’s Diversity and Inclusion Council. She was among the founding members of the D&I Council and served as its co-chair for many years. She is also co-chair of the firm’s Career Advocacy Program (CAP). Dionysia is a member of the firm's National Recruitment and Governance committees and formerly served as the hiring shareholder for the Atlanta office.

Previously, Dionysia worked with another labor and employment boutique in Atlanta and also served as a general counsel for another entity.

Assistant Secretary, Board of Directors

Steward, Board of Directors

Chart Your Own Course Foundation

Selected, One of 2019's Most Influential Women in Corporate America

Social and Political Issues and the Workplace – Implications for Employers

Courageous Conversations: An Equity Building Tool for Your Workplace

Strengthening Diversity & Inclusion in E-Discovery in a Post-Pandemic World

Pew: US adults split on consideration of race, ethnicity in hiring and promotions

Who Are You Overlooking in Your Diversity and Inclusion Plan?

#MeToo On My Mind

What The Olympics Teach Us About Diversity

HR Must Work Hard to Root Out Unconscious Bias

Office Holiday Parties – Some Advice on Having Fun….Lawfully

Is Bullying Occurring in Your Workplace?

The Honest Belief Defense Often Shields Employers From Liability, Even If Decisions Are Based On Inaccurate Facts

The Honest Belief Defense Often Shields Employers From Liability, Even If Decisions are Based on Inaccurate Facts

Accommodating Religious Requests in the Workplace

What Is the Current Impact of the Dodd-Frank Act’s Diversity Provision?

Retaliation Claims: The Difficulty of “Making the Connection” Between Complaints and Alleged Negative Conduct

Avoiding Retaliation Claims: A “Win-Win” For Employers and Employees

Workplace Diversity: Who is Championing African-American Professional Women in the Workplace?

Employer's Diversity & Inclusion Strategies: Why "Now" is Indeed the Time for Action

Ricci v. DeStefano: Talk About a Rock and a Hard Place: Employers Required to Pick Between Disparate Treatment and Disparate Impact Claims

Diversity, Affinity Groups and Religion: Balancing the Law with the Interests of Diverse Employee Groups

Panelist, Effective Diversity and Inclusion Management in the Workplace: What You Should Know and Do

Accommodating a Multireligious and Multicultural Workforce

Workplace Bullying: Identifying, Preventing and Managing It in the Workplace

What Every In-House Counsel Needs to Know About Employment Law

Out in Front: Harnessing (in)Visible Differences for Career Development

Practical Strategies and New Opportunities: What Do the Law, Dodd-Frank’s Diversity Provision and Workplace Innovation Mean for Diversity and Inclusion?

How to Navigate the Legislative, Regulatory, and Judicial Developments in Today's Enforcement Era

How Do You Spell Retaliation? A Look at the Ever Expanding World of Retaliation Claims

Accommodations Battleground: Religious and Cultural Differences in the Workplace