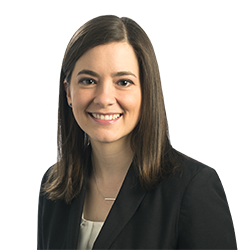 Alexa Laborda Nelson dedicates her practice to employment litigation and counseling. Alexa has represented employers in a wide range of matters, including:

Alexa has successfully defended employers in cases in federal and state court as well as in arbitration. Her results include:

Alexa devotes substantial time to firm and community citizenship. She is a member of the firm’s Women’s Leadership Initiative Steering Committee and the Reunión affinity group. For both groups, she works to enhance the firm’s already robust efforts on recruitment, retention, and mentoring diverse attorneys. She is also a member of Littler’s Whistleblower and Retaliation practice group, for which she is a frequent contributor. Outside of the firm, Alexa volunteers for the Delaware Valley H.R. Person of the Year annual awards event honoring excellence in the human resources profession to help select scholarship recipients, and on a neighborhood committee working to design a community park.

Prior to joining Littler, Alexa worked as an associate at a large law firm in Philadelphia where she represented businesses in both state and federal court. She also was a judicial law clerk for the Hon. Ronald E. Bookbinder, A.J.S.C., in the Superior Court of New Jersey, Burlington County Vicinage, Law Division, before beginning private practice.

Before pursuing her law degree, Alexa worked for her undergraduate alma mater in Bologna, Italy.

Fielding Whistleblower Complaints: How to Investigate, Avoid Retaliation, and Ensure Your Company Doesn’t Drop the Ball