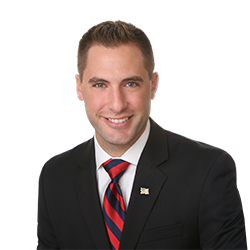 Tyler A. Sims advises and represents employers in all areas of labor and employment law. He focuses his practice on post-employment restrictive covenants, unfair competition, and trade secrets, traditional labor law and defending employers against federal and state harassment, discrimination, and retaliation-related employment litigation.

Tyler is experienced at handling traditional labor law matters for national clients, including:

Prior to joining Littler, Tyler served as law clerk to the Hon. David F. Bauman in the Superior Court of New Jersey. While in law school, he served as president of the Student Bar Association and was a legal intern for the National Hockey League (NHL). He was also a legal extern for the National Labor Relations Board (NLRB) and a student attorney for the Civil Rights and Constitutional Litigation Clinic.

Before attending law school, Tyler played NCAA Division I ice hockey for the Providence College Friars and then went on to enjoy a three-year career in professional hockey, including stints in the American Hockey League (AHL), East Coast Hockey League (ECHL), and Central Hockey League (CHL).

Cross-examination: From the Ice to the Courtroom