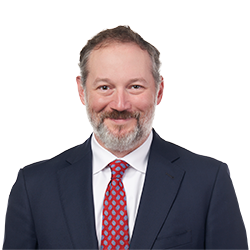 Management looks to Matt Brown for his distinctive labor and employment experience. With a unique background as a state official and a defense attorney, he provides legal representation that aligns with his clients’ business goals.

As an appeals hearing officer for the state of South Carolina, Matt presided over thousands of disputes involving dismissed workers, their former employers and complex unemployment insurance claims. He would hear testimony from both parties, review the facts of each case and issue decisions in compliance with state and federal law.

That quasi-judicial role advanced Matt’s tactical litigation skills when he later moved into private practice and defended clients in a range of industries, including governmental entities and municipalities; colleges and universities; and local businesses and international corporations. He has defended clients against an assortment of claims under the Americans with Disabilities Act (ADA), Title VII of the Civil Rights Act of 1964 and Section 1983 (42 U.S.C. § 1983).

Among the positive results Matt has secured for his clients are the following:

Matt advises clients on employment policies and procedures related to the Family and Medical Leave Act (FMLA) and the Fair Labor Standards Act (FLSA), among others, and guides employers in preparing legally compliant employee handbooks.

He helped start the Phi Delta Phi chapter at the Charleston School of Law and served as an officer for the fraternity.

Named, Legal Elite of the Upstate

University of South Carolina and Charleston School of Law

Littler Adds Matt Brown to its Columbia and Charlotte Offices

Feeling Lucky? Ask Us Your Labor and Employment Related Questions

None of Your Business? Discrimination and Leave Compliance Issues When Managing Employees with Substance Addictions