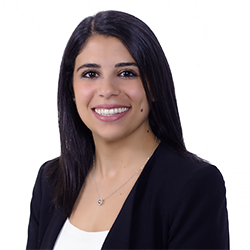 Shireen J. Karcutskie concentrates her practice in various aspects of immigration law, including employment-based nonimmigrant and immigrant visas, employment eligibility verification and related compliance issues, as well as investment-based immigration. She has a particular focus on the immigration processes related to colleges and universities, and significant experience working with professors and researchers to help them secure permanent residence. Her focus in immigration began in 2012, initially as a paralegal prior to law school, as a summer associate with a prominent immigration firm during law school, and as an associate with the same firm after law school.

During law school, Shireen served as a law clerk with Americans for Immigrant Justice. She also served as a student attorney with the University of Miami’s Immigration Clinic, where she successfully advocated on behalf of a client in removal proceedings, and wrote and submitted an amicus brief to Florida’s Second District Court of Appeal.

Breaking Down the New DOL and DHS H-1B Rules

Form I-9 Verification Due to EAD Production Delays