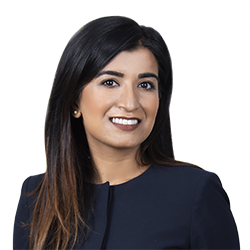 Sana Ahmed advises and represents employers in a broad range of labor and employment law matters. She holds strong litigation experience in state and federal courts in matters involving:

Leading with diplomacy and tact, Sana has established experience with internal workplace investigations, including drafting investigation guidelines and templates for employers, and conducting witness interviews in highly sensitive matters.

Prior to joining Littler, Sana worked at the Office of the Ohio Attorney General, where she advised and litigated on behalf of public sector employers such as cabinet-level state agencies, universities, and boards. Sana also worked internationally in the United Kingdom Parliament, and as a legal fellow at two NGOs: the International Bar Association in London, UK and Human Rights Watch in New York, NY.

During law school, Sana was recognized as the highest achieving student across five legal clinics as a recipient of the Jack Cronquist Award, awarded for outstanding advocacy, effective communication, and commitment to clients. She was a member of the Williem C. Vis International Commercial Arbitration Moot Court Team and competed against teams from across the globe in Hong Kong. Sana served as a contributing editor of the Journal of Law, Technology, & the Internet and was managing editor of War Crimes Prosecution Watch. She additionally served as president of the International Law Society at CWRU Law, and was vice president of the National Muslim Law Students Association.

Return-to-work issues hotels need to be aware of