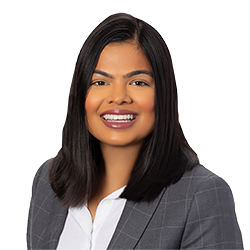 Prior to joining Littler, Pooja worked as a labor and employment associate at a full service national law firm. She represented private and public employers on claims involving Title VII of the Civil Rights Act of 1964, Florida Civil Rights Act,  Florida Whistleblower’s Act, Americans with Disabilities Act, and Age Discrimination in Employment Act.

During law school, Pooja interned for the Hon. William L. Thomas on the 11th Judicial Circuit Court of Florida and at the Equal Employment Opportunity Commission (EEOC). She also competed on behalf of FIU on the Board of Appellate Advocates and the Negotiation and Mediation Team. While on the Board of Appellate Advocates she competed in the Billings, Exum & Frye National Moot Court Competition, making it to the semifinals. Pooja was also the internal vice president of the North American South Asian Law Student Association. Finally, she was a Dean’s Scholar, and upon graduation was awarded an Excellence in Civic Engagement Medallion for pro bono work.