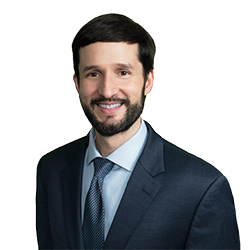 Mike Wilson represents and counsels employers in various employment and labor matters arising under federal, state, and local laws. Mike has appeared before state and federal courts and administrative agencies, including the Equal Employment Opportunity Commission and state Human Rights Commissions. He defends and counsels clients on issues such as:

Before joining Littler, Mike practiced employment law for several years at one of the most prestigious law firms in Montana and clerked for U.S. Magistrate Judge John Johnston in Great Falls, Montana.

In law school, Mike was editor-in-chief of the Montana Law Review; competed on his school’s trial team; was a teaching assistant for his school’s legal writing, criminal procedure, and criminal law classes; and was a clinical intern for U.S. Magistrate Judge Jeremiah Lynch in Missoula, Montana.

Prior to pursuing a his legal education, Mike was an HR professional at an offshore drilling company in Houston and earned his PHR certification.

Opening in Montana: Navigating Employment Issues in the Wild West

Medical Marijuana and Drug Testing in the Workplace