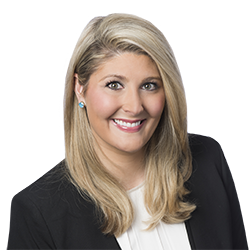 Lindsey Rendlen Latzke is a member of the Littler CaseSmart® team and is based in Missouri. She is responsible for early case evaluation (ECE) for class, collective, mass and representative actions. At the outset of each matter, she identifies and reviews pertinent documents, interviews relevant witnesses, coordinates with firm data analysts to conduct damages modelling, and drafts an ECE report for clients’ cases. In keeping with each client’s litigation philosophy, she partners with the local Littler litigation team and assists in developing and executing strategies for effectively handling litigation.

Prior to joining Littler, Lindsey was an associate at a firm representing private and public employers across the U.S. in a broad range of industries, including construction, manufacturing, trucking and distribution, home healthcare, finance, commercial farming, higher education, retail and hospitality.

Her practice frequently focused on compliance and defense of single-plaintiff and class action claims arising under federal and state wage and hour laws, including appropriate classification of employees as well as wage compliance for sheltered workshops under Section 14(c) of the Fair Labor Standards Act (FLSA).

In addition to representing employers through her legal practice, Lindsey previously worked as the director of employment practices and policy for a Fortune 500 company, and was responsible for all aspects of compliance with state and federal employment laws and implementation of the company’s employment policies affecting nearly 8,000 employees across the U.S. In that role, she was part of the company’s mergers and acquisitions team, and was responsible for ensuring compliance with state and federal employment laws through the due diligence phase and post-acquisition.

Lindsey has extensive experience counseling and representing employers before various administrative agencies including the U.S. Department of Labor’s Wage and Hour Division and OFCCP, EEOC, and NLRB, as well as state and federal courts regarding labor and employment matters arising under:

Lindsey is also experienced in:

Prior to law school, Lindsey spent several years as an investigative journalist and news anchor, focusing her coverage on courts, crime and the Missouri State Capitol. She was honored by the Missouri Broadcasters Association several years in a row for her investigative reporting and news series on the death penalty and Missouri’s sex offender registry laws, in addition to her coverage of breaking news.