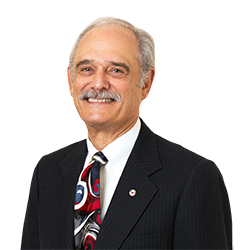 George E. Chaffey has more than 25 years of experience preparing and reviewing employers' affirmative action plans and assisting government contractors with hundreds of audits, including glass ceiling audits by the Office of Federal Contract Compliance Programs Practice. He regularly advises clients on:

He has particular knowledge and expertise with Executive Orders and all laws and regulations administered and enforced by the OFCCP.

George also advises employers in a range of employment and labor issues, including wrongful termination claims and discrimination suits. He conducts and reviews statistical analyses of employment activity data, analyzes compensation reports and multiple regression analyses, and reviews and critiques diversity programs for the entire spectrum of government contractor clients, including:

Additionally, George is a frequent speaker before business and professional associations, including at Rotary Club conferences, where he provides training for future club presidents and district governors in the western United States and Canada.  After joining the Littler's San Francisco office, George became a founding member of the firm's Walnut Creek office, established in 1986. He is founder and former chair of the firm's Office of Federal Contract Compliance Programs Practice Group.

Prior to joining Littler, George was an instructor of law at Grimes School of Law, University of Liberia in Monrovia, Liberia. He also served as the executive director of a county-wide legal services program in the San Francisco Bay Area. In his free time, he flies a classic 1948 Luscombe stick and rudder airplane.

Employers May Not Use Affirmative Action Goals to Justify Hiring Preferences