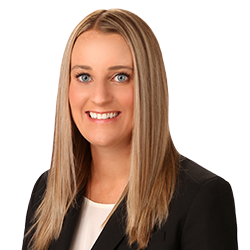 Christie Pazdzierski dedicates her practice to employment litigation and counseling. She has represented employers in a wide range of matters, in federal and state courts at both the trial and appellate levels, and before federal, state, and administrative agencies. She has handled matters involving employment discrimination and retaliation claims under Title VII of the Civil Rights Act, the Age Discrimination in Employment Act (ADEA), the Americans with Disabilities Act (ADA), the Family and Medical Leave Act (FMLA), and their state counterparts; claims of whistleblower retaliation under the New Jersey Conscientious Employee Protection Act; and litigation of restrictive covenant and trade secret matters, including claims under the Uniform Trade Secrets Act and the Defend Trade Secrets Act. She has defended against equal pay act claims, as well as employment-related torts, contracts, and civil rights claims.

Christie’s employment litigation experience includes managing cases from inception to resolution, including trial and appellate proceedings. She has successfully obtained pre-trial dismissals in numerous matters at the motion to dismiss and summary judgment stages. In her trial practice, Christie recently obtained a directed verdict in favor of her client in a whistleblower retaliation claim. In her appellate practice, she successfully obtained reversal of a multimillion dollar jury verdict that was awarded to a former employee of a state prison in a whistleblower lawsuit.

Discrimination and HarassmentWhistleblowing and RetaliationLeaves of Absence and Disability AccommodationArbitrationStaffing, Independent Contractors and Contingent Workers

Non-Disparagement Provisions Not Barred by NJLAD’s #MeToo Amendments, For Now