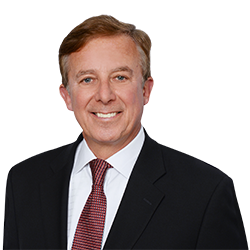 Thomas Flaherty's practice encompasses most areas of employment and labor law, including litigation and advice involving both individual and class action matters and a broad range of issues. He represents clients in state and federal courts, before administrative agencies and in arbitration. He has litigation experience in matters involving:

He has represented clients in actions filed by the Equal Employment Opportunity Commission, the Department of Justice and the Lawyers Committee for Civil Rights and other advocacy groups. He has extensive experience in investigations, compliance training, employment contracts and policy development, and he has advised clients on a range of issues in the private school sector and under Title III of the Civil Rights Act.

On the traditional labor side, Tom's experience includes:

Tom is the founder of Littler Mendelson's Virginia office. Before joining Littler Mendelson, he was the managing partner in the Northern Virginia office of a national general practice firm. He was previously partner and head of a Northern Virginia labor and employment practice, where he also served as firm-wide recruiting chair. After law school, he served as a law clerk to the Honorable W. Arthur Garrity, Jr., United States District Court in Boston. Tom was editor-in-chief of The Law Review at Boston College Law School and served as an aide to A. Bartlett Giamatti while at Yale.

What’s Yours is Mine, and What’s Mine is Mine: The Latest on Protecting Company Trade Secrets, Non-Competes, No Poaching Agreements and Other Protections

Retaliation and Whistleblowing: The Wave Becomes a Tsunami

Social Media Grows Up — and the Authorities Are Watching

Developments in the Protection of Trade Secrets and Business Goodwill

A Brand New (Work) Day? What the New Administration and Congress May Have in Store for Employers

Compliance Solutions from the Boardroom to the Courtroom