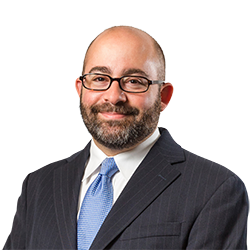 Stephen P. Rosenberg advises and represents businesses and nonprofits in a broad range of employment law matters, including:

Steve’s successes on behalf of clients include the following:

Previously, Steve worked as a staff attorney for the Connecticut Department of Labor. In that role, he supported the agency’s Employment Security Board of Review in its resolution of unemployment appeals involving individual claimants as well as independent contract classification audits. Earlier in his career, he was a law clerk to Associate Justice Joette Katz of the Connecticut Supreme Court. During law school, Steve was executive editor of the Connecticut Law Review and graduated in the top 10 percent of his class.

Named, New Leaders in the Law

A Broader Definition of ‘Employee’: State Supreme Court and Legislature Weigh In on Wages and Records

Facing Up to Facebook: Social Networking Sites and the Workplace

COVID-19 Considerations for the Workplace: ​An Employer Overview

Conducting A Wage and Hour Self Audit

Employee Records 101: What Every Business Manager, Owner, and HR Representative Needs to Know

Unemployment: Improving your Chances for Winning

The Impact of Social Networking on HR: Policies and Legal Implications