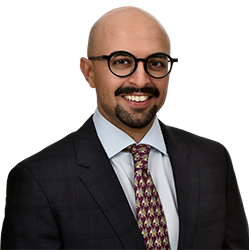 Hider J. Al-Mashat has over eight years of experience in the practice of California employment and labor law. He has been involved at every stage of litigation from both the defense and plaintiff side, including workplace investigations and audits. He has counseled corporate clients in the entertainment, manufacturing, restaurant, employment agency, and service industries. Hider's experience includes matters regarding accommodations, terminations and wage practices/compliance. He has been involved in filing and answering complaints, defending and deposing witnesses, and drafting and opposing law and motion. He has successfully argued before Superior Court judges, negotiated and settled civil disputes, second chaired numerous employment disability discrimination/harassment/retaliation trials, and drafted appellate briefs.

During law school, Hider was a legal participant in an entertainment law clinic where he rendered advice and counsel to clients regarding independent film production and intellectual property concerns, prepared script clearances, drafted and revised contracts for employees, locations, talent, licensing, and consultants. He also served as an extern to the Chief Deputy of Civil Liability, Jeanette Schachtner, in the Santa Monica City Attorneys' Office, and judicial extern to the Hon. Diana M. Wheatley, Los Angeles Superior Court. Hider was a member of the Southwestern Law Review.